For a long time now I have wanted to discuss Jae Lee, but have never thought capable of doing him justice whilst concomitantly addressing some readers’ antipathy. But with Superman and Batman completing its first arc, it is an appropriate time as there is a wealth of work to analyse. Throughout all discussions, online and in person regarding your devotion or aversion to the work, there is one unassailable truth: Jae Lee is phenomenally gifted artist. 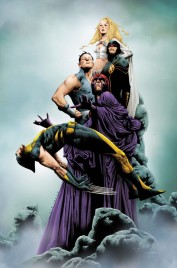 Given my allegiance to the X-Men it is unsurprisingly that my first experiences of Lee were the covers to Wolverine and Dark X-Men. These poignantly display the thematic approach Jae employs to his artistry. I have always adored the cover to Wolverine #13 because it always induced the feeling of tumbling from a cliff edge. The precise poise of each character is a perfect score in a diving competition. Of course they are all actually attacking Wolverine, who is booted firmly in the face causing blood to splatter. He is taken aback forming a perfect arc, whilst the other adversaries formulate offensive positions. There is a clinical impeccability on display here, which is why it is hard to actually tell there is a battle going on. Nevertheless the range of postures and colours atop the shaded backdrop, gives a beautiful appearance. The arc sublimity is once again displayed on the second cover, as Wolverine’s back and claws form a stunning ellipse.

The second fundamental feature of Jae’s work is the indomitability and sheer arrogance of his protagonists. Namor, Cyclops, Magneto and the White Queen look incredible and are almost posing for a photo shoot. Once again the colouring and shading bring out their figures and costumes, especially Magneto’s cloak which is almost vibrant with life. Their attitudes are firmly ingrained in their facial expressions, as each character is looking down their nose at Wolverine, sneering with indifference. Which brings us to the third cover that demonstrates how those themes apply to the antagonist, in this case Norman Osborne. The magnitude of his chagrin is depicted by his nonchalant slanted seated position, and the righteous indignation at which he hurls the X-badge towards us. It is a foreboding and belittling page and strikes fear into all. Note once again, the use of darker clothes and shading to imply a gothic sinisterness. The firmly directed scowl is befitting any evil persona and is borne out so brilliantly by Lee’s pencils. 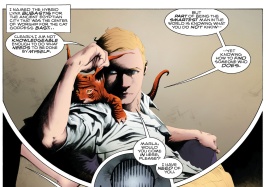 My next experience of Jae Lee was the Ozymandias Before Watchmen title, where he pencilled the whole book. Whatever your thoughts were to the franchising of Watchmen, there were some artists trying very hard to produce their best work. The above two panels epitomize the themes discussed above. The way in which Ozymandias stares directly at you with confidence and assuredness, is incredibly alluring. There is no anxiety or neuroses with this figure and if you have read the book, then you know why. His posture is quite simply scandalous. This intoxicating vanity is carried into the fight in the panel adjacent. We visualise the grace displayed in pummelling the assailants but also the dignified descent in their defeat. Jae does not display any points of impact in these action sequences. There are no flailing limbs or cursed faces, as a calm serenity washes over, bringing order to chaos. There lacks a fluidity and intensity, which comes with a brutal attack from a group of thugs.

The preceding panels demonstrate the difficulties encountered with your basic combat scenario. Once again the shaded garb and silhouetted backdrops are incredibly easy on the eye. However the fight is not really a fight, but panels of still photos taken during it. It is not dynamic or emphatic and neither character is suffering the toils of battle. That actually may be the case with these two anti-heroes, but it is a recurring theme of Lee’s art. The fight does not flow easily and the gorgeous panelling, makes you halt to appreciate the fine artistry as opposed to following sequential fight panels. If you notice there are no sound byte effects or accentuation lines that impress a punch or a block. It is almost as if, the purity of the page would be sullied or soiled. The next page is another prime example of how wonderful Jae’s art is to view but not to depict a confrontational scenario. It is an exceptional use of silhouetting in portraying movement but does not flow easily or highlight any impact or damage. Granted it is used to better effect than the panel previously but Ozymandias, whilst easily recognisable, is performing exceptional/impossible feats of agility and balance. It is more in tune to an elegant gymnastic performance that a series of violent acts. Nevertheless it is an impressive double page spread that is aesthetically pleasing. Before moving on, it is worthwhile mentioning that the backgrounds to the above images are relatively sparse. Many of them incorporate a pastel colour or often encompass a silhouette of objects in the environment including trees and birds. The odd cityscape appears in remarkable detail, but on the whole the art takes centre stage with little distraction. Combine the purity thematic with the lack of backdrop and an ethereal quality overwhelms the scene.

As we move into Batman Superman it is possible to theorise the approach Jae will take in their creation. Batman is almost an archetypal character for Jae to draw, as he fits perfectly with the shadowy netherworld of Gotham City. Superman must represent the exact opposite in order for the book to work. The cover of the first issue is suitably juxtaposed, as Superman is ready for action with his head held high and his cape streamlined and ready for flight. Whereas Batman is dark and expressionless, with his erratic cape flaying outward, perching below Superman. As we have it Greg Pak brings about a complex and somewhat convoluted storyline to our central heroes. The parallel universe with alternate age of Superman and Batman will potentially suit the Jae otherworldly aesthetic. 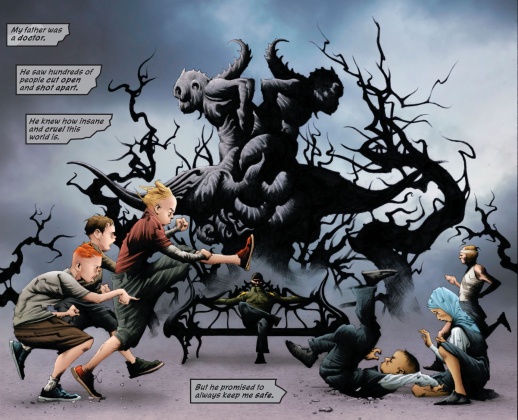 At the very beginning of the book we are gifted this wonderful panel. It is of a scene where children are fighting, once again a stillshot picture of perfect poses mid struggle. However the background is the most important part of the art because there is a brilliant silhouette of a tree to the sides of a centrepiece gargoyle sculpture. The gothic theme of the panel is perfect for the character sitting centrally on a bench, Bruce Wayne. There is so much information to be gleaned from this panel, as it is stylistically a perfect fit for Batman. Even the children, showing a bully bringing down a peer with his boot is symbolic of the city Bruce inhabits. But it is the branches that I cannot seem to take my eyes away from, as they are so sinister that they appear to be spreading insidiously. This affect was utilised in an Ozymandias page, also involving a tree and grappling children.

However when we turn to the superhero clashes we encounter similar problems to Ozymandias. The panels display a single punch or kick landing but the fluidity of the scene is stifled. There are two confrontations occurring simultaneously between identical characters, which pertain to additional difficulties. The lack of background diminishes our spatial awareness, and there is no relationship with the environment in which they tussle. Some readers have made mention of the physical plausibility of the combatant, such as Batman in the above panel. I generally do not have a problem with how realistic the shapes, are because Jae paints a dream like comic anyhow. It is noteworthy that sound effects have been added to the sequence, which accompanies actual fists connecting with faces. This is certain emphatic improvement to the melee. It is easily arguable that this is not overtly essential to the ethereal theme of the book, but when Superman faces Superman I want to see earth-shattering impact, and when Batman fights Batman I want to see a tactical evasion. I generally believe many artists would have similar difficulties because it is an unenviable task and incorporates a variety of character attributes.

As I conducted my review of Jae’s work, I found myself sitting in awe of the splash panels and unable to turn the page without soaking in the beauty from the page. I relate it to visiting a gallery and perusing various painting until you find those that you do not wish to move from. Therein lies the immense enjoyment of Batman Superman but also the problem as a comic book. The story does not tell easily because the art is almost obstructive to the plot. Highlighting individual panels will only bear out the positives of Lee’s work but if you read it as comic, then it falters in providing a coherent narrative. This is partly the reason why some readers find his work invigorating, but others find his books difficult to read. Hence why his covers are always so incredible. Ultimately whether it works or not, is down to the individual and we are responsible for our own purchases. Everyone is entitled to his or her opinion, but Jae Lee’s art is Jae Lee’s art and that is how he expresses himself. Whatever issues I take with the book are my own, but they are superseded by some of the most breath taking work I have seen in a comic book. As long as Jae Lee’s work is on the front page of a comic then I will always buy it. Before we finish, I must showcase on a couple of said panels of resplendence. 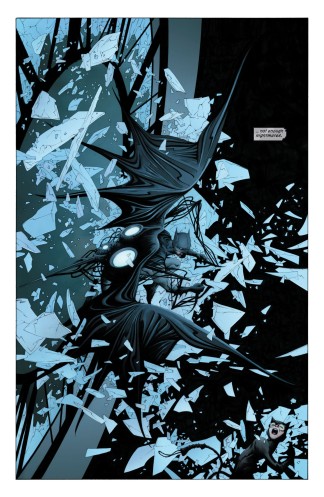 This piece renders the sound of glass breaking without the need for sound effects because the shards are so meticulously drawn. The variety of shapes and sizes and the crashing Bat glider, bring about a surrealist slow motion image. It is just a wonderful page and I do not think I have seen broken glass depicted so emphatically anywhere else before.

This final panel once again utilises the silhouette of a tree, but this time it is burning, providing the most impressive burnt orange atmosphere. Combine that with a young Clark staring at his long dead father, and you feel a longing sadness with our boy scout. What I love most about it is that Clark’s face is barely visible through the shadows cast from the camouflaged sun, but his posture is defiant in belief as he sees the ghost ahead of him. The alternate universe Pa Kent is standing frail and afraid as he clasps his hands in front of him. We are unable to see his face but instantly we can tell he is anxious as he faces a younger, brasher son ahead. The angulation of the page is an interesting effect that provides additional vigour to the tree, the fire and the characters introduction. Pak’s writing is engaging to the reader and sets the scene perfectly as we witness the emancipation of Superman. Whether you find Jae Lee’s work stunning or stifled, when you come across a panel like this, then there is little doubt that he is a delectable treasure of the comic world.