Welcome to the second Tagging the Walls post! Though it comes with some resentment and loss of rectitude, but that is the sacrifice I am willing to make for those I am devoted to. I am not sure the same can be said about Ben (@punkrocksellout) as he deliberately tortures me with is choice: The hardcover edition of Private Eye. Note the emphasis on hardcover because he knows all too well my feelings towards the selling of a once only digital comic in a paper format. If you missed that particular post then this is the link: https://houseofflyingscalpels.com/2015/09/23/the-private-eye-hardcover-oxymoron/ . It is one I am very proud of as not only did Brian K Vaughan converse with me regardin

g it but there were some interesting counter-opinions giving a post of opposing views; an ideal I have longed for. Before we head into the review, I must inform you that I borrowed this book; otherwise my moral integrity would have been completely dragged through the mud by my erstwhile friend Ben!

Though I was vocal against the publication of Private Eye, it was always with a sense of betrayal because I thoroughly enjoyed this book. The world in which it lives is decades in the future and is one of cynicism and secrecy, post the destruction of a virtual information cloud. Quite simply BKV takes the current negatives of the social media frenzy we partake in and takes it to the extreme. A place where not a single actual face is visible in public and everyone wears masks or “nyms”. The premise is that we all have secrets and it is impossible to hide them when a digital trail exists, so remove our signatures and the world becomes dark. The Great Flood erased all identities and allowed everyone to start afresh. It could not be more theological a concept even to the point where BKV assumes everyone a sinner. Except that no one wishes to take ownership and live their lives in the actual camouflage they wear outside. It is that shame that the grandpa of the protagonist objects against as he feels that one has a right to their own identity and the flaws that come with it. Patrick Immelmann or π or even PI is the super sleuthing detective who is tasked with finding who murdered Taj McGill. He is accompanied by the victim’s sister Raveena and his underage protégé getaway driver Melanie. 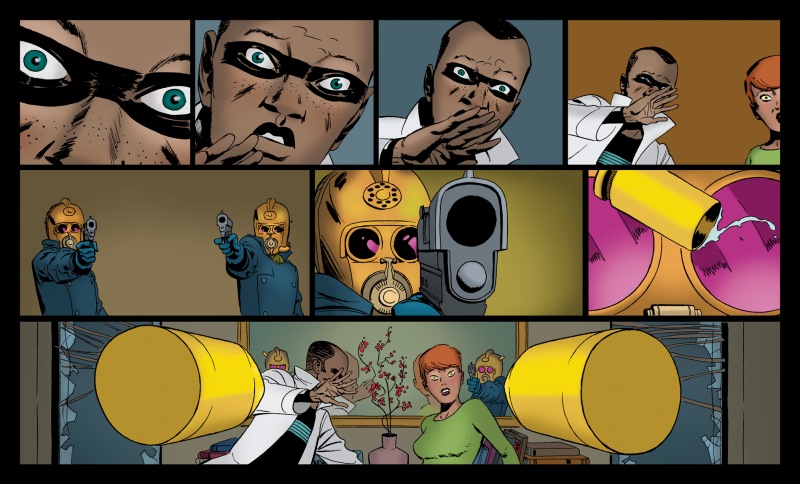 This book falls neatly into a detective story with multiple instances of our daring duo escaping near death experiences and running from villains. The characterisation is quite inventive with PI struggling to balance the loss of his mother with a gay ex and nutty grandfather, not your classic gumshoe. His pseudo partner is a begrudged lady struggling with the loss of a sibling who was clearly involved with a cult deriding the loss of the internet. There is no romance to be had and their relationship is one of sheer determination and resolve. PI doesn’t even appear to like Melanie who is adorably naïve making her plight even more tragic. These rapports are rooted in deception and mistrust which is in keeping with the tone of the book. It is the environment that bears the subterfuge of the indigenous population and Marcos Martin is thoroughly enjoying drawing all types of masks. Even PI wears an enigmatic article of clothing that hides his figure, beautifully titled the Dreamcoat. Add in the brutality of the violence and the bright colours and the pages do a wonderful job of hiding the underlying grim themes. Marcos Martin is a joyous artist to behold because his thin crisp penmanship lends to precise expressions and dynamic movements. The opening pages of the book are akin to watching a chase sequence of a movie. PI spies his target and the panels are large and slow, but when he is spotted the flow on the page is magnificent running straight into the title page.

There are so many moments where the panel decisions and close ups leave you in awe. The moment where Raveena realises her sadness whist PI takes off his makeup is terribly tragic, as the tears well in her eyes. The tension of the pointed firearm waiting to fire builds to a point of fervour and anticipation. And this is the point at which I notice that

there are some parallels that cross the pages, which would not be noticeable reading as a digital format. This is not a common feature considering this was a digital format original but it is obvious where pages do flow less naturally on the screen. As much as the hardcover is pretty it is a little arduous because of its physical length to read. It is not a book you can read easily in your hands. Otherwise there are little differences in appreciating the comic in either manner. However the story loses some poignancy as a graphic novel…

The idea of this book is interesting and though cynical, portrays quite an unbelievable society. Not only is it hideously pessimistic but endemic of the depraved society. Whilst reading in a serialised form, it affords the opportunity to consider this world and how one might live within it. Reading as a solid book it bears the obvious flaws that there really aren’t interesting facets to the plot. Even the trite finale is to prevent a rocket from launching a satellite that’ll jumpstart the internet. The villain is actually quite correct in his thinking that a sharing of ideas is advantageous to the development of the human race, which is essentially the world in which we live. It is the sole reason you are even reading this review. Those ideas were not obviously appreciable upon first reading and it is unfortunate that I found the book less enjoyable the second time round. The art provides a gloriously diverse aesthetic and prevents a rapid reduction of the comic to the film noir trope, but only cinematically and certainly not thematically. Let that not take away from the success of the DRM free pay what you feel model that this book achieved, but also the solid writing with nuanced commentary and stunning artwork and colour.