Matt Fraction and David Aja have made Hawkeye into one of the best Marvel books today. The reasons are many but I wanted to focus on the art of the book, and especially the fight sequences. Action sequences are often bereft of coherence and appear to be a random selection of fighting panels. David Aja’s work could not be further from that statement, as they are unique and a sequence of flowing fists and weapons. The above page shows his interesting panelling technique that involves one large box, where most of the action occurs but it sits between the smaller panels, that occur before and after it. It reads well as you can seen him throw a card with a circular motion and the subtle movements of his hand are displayed before it hits the guy in the throat. This then leads into Clint fighting lots of men with a table thrown to the floor and chips, cards and bills flying on the air. The gangsters are either ready to strike, caught by surprise or have already been taken down, but the guy top right has the bottle. The fight then moves to smaller panels again as Barton is hit with the bottle, and taken down. It is a great way of demonstrating the violence as the scene feels fluid and individual hits are shown amongst a grander scale. There is even room for some thought boxes to tie the scene together. It is incredible how so much is fitted onto one page. 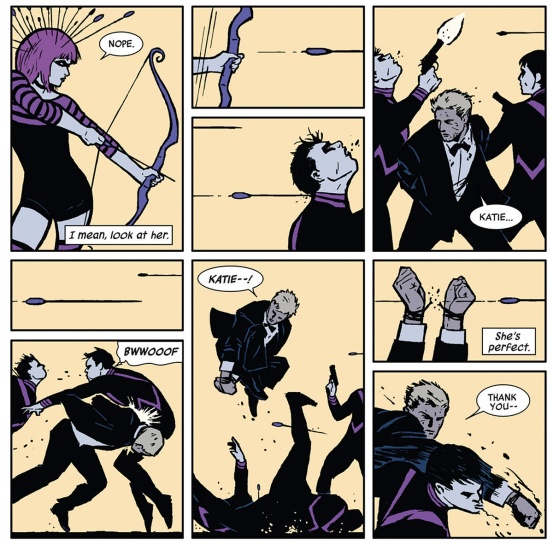 This sequence from issue two has a similar flow but a different tactic, as instead of smaller panels, there are panels showing the movement of characters and arrows in one scene. It is similar to a puzzle where the pieces can all fit together but the characters have moved before you can complete it. Katie fires the arrows which strike the assailants, as Clint hits and jumps to release his cuffs from a flying arrow, before landing a further punch. Its is majestic in its nature and it works so well on half a page. The last scene below is of a similar approach and Katie is grabbed by Clint and while she is caught, she rotates and fires an arrow. The action is moving as we see it and while there are villains on the floor who have not moved, we can see Barton running over them.

I have to give Matt Hollingsworth credit for the simple but effective colouring, which highlights the hero and bad guys by simple colour patterning. I just adore how David Aja draws arrows and physical motions and I cannot compliment the artwork enough, as it is truly sublime.