Warning this review contains spoilers in a roundabout way!

If you have read my blog previously then you may have picked up my love for Manhattan Projects, which is a brilliantly complex and original idea for a book. Its author Jonathan Hickman has been given the opportunity to take on well-established heroes, and guide them through parts unknown. He has been passed the mantle from Brian Bendis, who has left giant shoes to fill. Steve Epting first came to my attention when he pencilled Ed Brubaker’s epic Captain America reincarnation. His style is heavy, thick and rich style, which really suited the depth and seriousness of Cap and Bucky. They have both worked as a creative partnership on FF and have been rewarded a Marvel toy box of superheroes to play with. In my comic reading lifetime The Avengers has only been written by one man, but now Hickman must carve his legacy afresh and anew.

The narrative of this book is coherent and seemingly simple. Jonathon dedicates time to the introduction of new characters, allowing us to clearly recognise their background and purpose. When it comes to established heroes and relationships, the art to takes over the direction and allow personalities to shine. The monologue of Black Panther is an incredible piece of writing as it effectively highlights his aims and ambitions, but also his fears in facing the inevitable. It has accompanying illustrations with the Illuminati being drawn from identifiable features, such as Reed Richards’ fantastic four symbol and Back Bolt’s unique headwear. I just adore the style of the book. It has a great flashback sequence, which is coloured like an old burnt parchment with excellent dedication to the old costume styles of the Illuminati members. Epting knows how to be serious; he has the edgy, moody motif down perfectly. The faces are heavily pencilled with purposeful shading in order to create tension. T’Challa’s monologue serves as an excellent prelude to the incredible final page grandstand. The single panel page displays the Avengers with movement, posturing and facial expressions that just ooze confidence and inspiration. Epting has honed his ability to create a sense of intensity and epicness, which fits perfectly with the tone of this book. 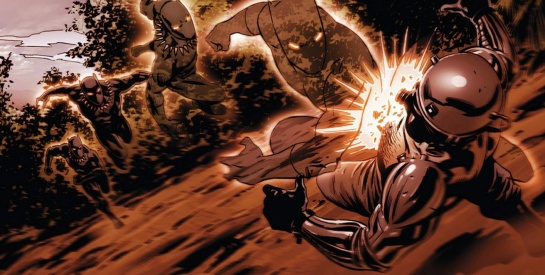 At first glance this issue appears to be your basic plot with invading powerful aliens, adding in a dimensional portal and sacrificial Wakandian scientists for good measure. However there are deeper themes of a powerful elite ruling over dangerous threats, leaving the little man lying in their wake. T’Challa’s objection of the Illuminati at the beginning of the book leads to reticence by the end. The book employs a very clever and poignant analogy to the purpose of the Illuminati. The scientists are clearly extremely intelligent, but their lack of insight into threatening new species leads to their untimely death. Whereas Black Panther was more cautious but still was unable to protect his loyal subjects. He was powerful enough and clever enough to survive, but in this scene he represents the all-powerful few, and his martyred people are the rest of the planet. If we parallel this to T’Challa’s argument at the beginning of the comic then it provides countenance to the Illuminati belief that they know better how to protect the world. What is his response to this alien threat? Welcome back the Illuminati: the all knowing, the powerful, the elite. This is a great start to the book and I hope that Hickman explores the ego’s and conflicts with this super group, instead of them fighting bigger and bigger enemies. I find this concept very novel and intriguing, and I hope Black Panther plays his part on this, his own deeply personal stage. 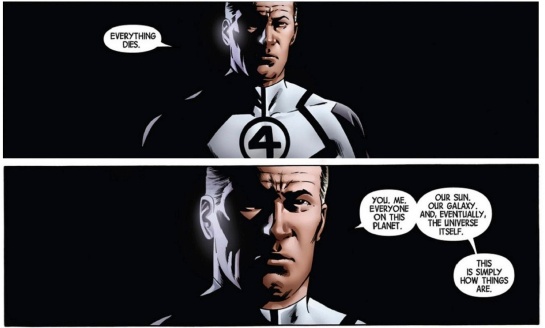 “What kind of future astronaut-explorer is afraid of a little first contact?” 9/10