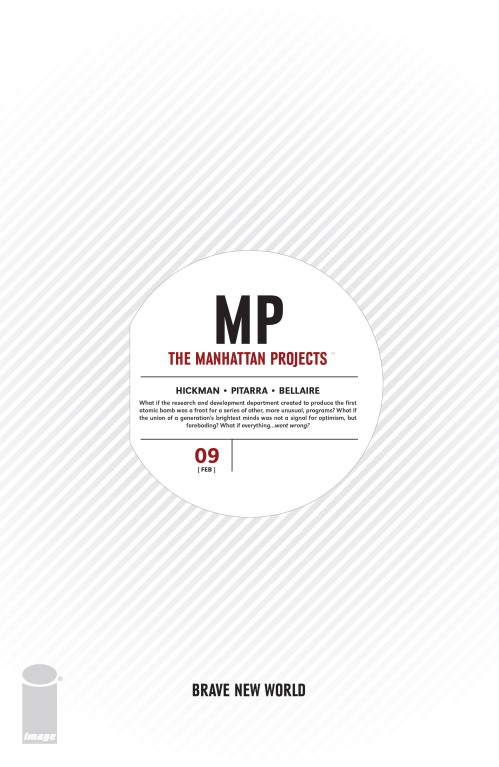 I have been waiting to write a piece on the covers of Manhattan Projects. Given how exceptionally good the book is written and drawn, we have always had such basic and simple cover pages. I bided my time and this cover arrived, the simplest of them all: white with diagonal grey stripes. It reminds me of the play “Art” where three friends argued over an expensive painting which was simply a white canvas with off white stripes. The definition of art was called into play and the meaning of the painting deliberated upon. There is very little or no meaning to this cover, it just is. There is no reference to the comic itself and you would have no idea about the story or cast from this page. It is devoid of meaning, it rebels against convention, there is no story: only the hard facts of the book. It is the anti-cover to all the other comics on the shelves around it. I am unsure as to who even designed it but I admire its courage especially as it is meant to promote the book itself. The pattern is quite pleasant to look at and almost mesmerising if you give it a chance. It is a peaceful cover to a warring pages underneath. The no frills approach makes it standout and the comic really is of a high quality. In many a way the white peaceful cover is the antithesis to the book itself, which is the definition of war. Andy Warhol once stated that his art had no meaning, you look at his cans of baked beans and that is all they were. There is no message, there is no hidden meaning underneath it all. What you see is what you get, you either like it or you don’t and there is no search for depth. This Manhattan Projects cover is the Andy Warhol of comic book covers, and I applaud it’s ambition.