In creating this book, Nick Spencer has gently taken Morning Glories a step further into the darkness. As I become more familiar with his style in the mainstream world, Bedlam moves in a direction I never thought possible, one that is relatively unique in comics. Riley Rossomo is a young artist who has worked mainly at Image comics, and has only spent a small amount of time at Marvel with Dark Wolverine. They take on a gothic and dark world, not dissimilar to Gotham. The first issue sets up the main characters Madder Red and The First. They are a direct parallel to the Joker and Batman with a tough resolute protagonist and an insane violent antagonist. Before you assume this book is a simple copy, you realise it is more from the perspective of the bad guy than the good guy. Madder Red has been rehabilitated over the years, through somewhat nefarious means and The First has moved onto pastures new. The book sets up a new ultra violent crazed villain, but we view the events from the perspective of a mentally stable Madder Red, now called Fillmore Press. This is where it gets interesting. 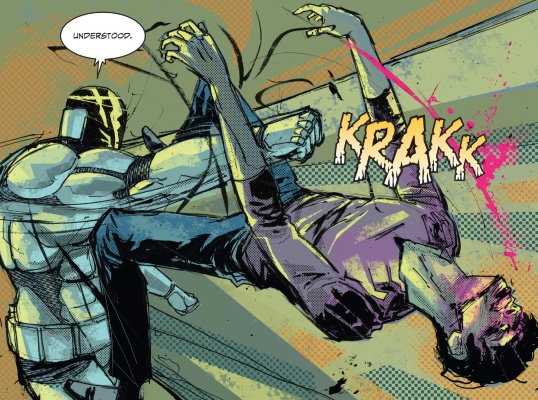 Nick Spencer has created an engrossing character who has very simple and almost childlike dialogue. Press clearly does not fit into society and that is so well demonstrated in his interactions with people and the police. Madder Red was a truly sick man and the flashbacks allude to this, but Fillmore has undergone a lot of trauma to get to where he is now. Spencer has written him so well that he brings out your sympathetic side despite his horrid past. The plot progresses well with the main villain story interspersing with Red’s development and interest in him via news reports. Riley Rossmo has this book look as disturbing as its antagonists are. Characters faces are distorted and tormented with the sheer blood-curdling images on display. Fillmore has large eyes that always seem to be looking up as we look down on them, emphasizing the puppy dog sympathy look. The art is almost scratched together as this imperfect world is just held upright by a few strands of Rossmo’s pencils. The colouring is important to the mood of the scene, especially when it comes to the violence. The evil villain is especially disgusting as he often appears naked with mutilated genitals and metal wings on his back. This book is not for the faint hearted. 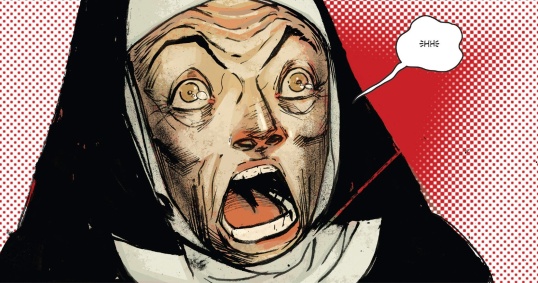 This issue continues the story of Filmore helping the police, whilst the serial killer continues his quest for redemption. The new evil sociopath has a killer motif similar to characters out of the television show Dexter. Madder Red becomes the police’s expert informative, a role similar to Hannibal in The Silence of the Lambs. This makes for a chilling combination of themes and it is put together incredibly well. Each issue is as good as the last and the suspense just builds. I have always felt that the crux of the Joker Batman dynamic lies with the clown. This is borne out in certain arcs and especially the movie The Dark Knight. Nick Spencer has developed this Filmore/First relationship and taken it further down the line. Fillmore Press is a character difficult to empathise with but we are made to pity him and feel for him. He has had brain surgery and behavioural conditioning leading to a non-violent, socially inept, guilt ridden man. Very little has been said about The First at all, except he is the hero the city relies upon. Even their reconciliation in this issue is rather non-eventful as The First just gets on with business. I wonder whether there is more to be revealed about him, but right now I sit at the edge of my seat waiting to see what horrors are to be seen, and what Fillmore will do next. Nick Spencer is doing to the Joker, what Mark Waid did to Superman in Irredeemable. They have made them move forward from the status quo and the results are refreshing. This book is going places I have rarely read and I am truly enjoying the journey.

“I figured that if I started talking about religion…”