Eric Stephenson is the publisher of Image comics, which is certainly a commendable position to hold these days. Quite the prominent writer in the 80’s and 90’s, and he has editing comics for Image since. Nowhere Men is a rare appearance from Stephenson as a writer, which seems to be quite unfortunate! Nate Bellegarde’s work includes Elk’s Run, Invincible and Hack/Slash. He is a relatively young artist yet to make his break on the mainstream companies, but at the rate Image is progressing, he will be already working for one. Nowhere Men is a book of science fiction based around a company founded a few decades ago, by four revolutionary thinkers. The book focuses upon a scientific division of the company who seem to have contracted an illness, which is affecting people in weird and wonderful ways. The only problem was that they were on a space station, and no one knew they were there. The story intertwines between the fate of the scientists and the slowly unveiling conspiracy around them. 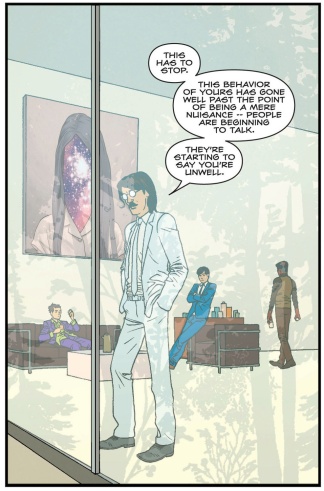 There is a fantastic adjoining story which involves the “fab four” World Corp founders. The company men begin to argue and the once unanimous ethos begin to change, the band begins to fold. How this relates to the scientists is yet to be established. The originality of the plot is as inventive as the founding fathers themselves, and Stephenson achieves a delicate balance of the two storylines. There are three distinct entities in this comic, the sleuthing scientists, the World Corp owners and the unknown conspirators. The characters fall into these groups and play their part perfectly with the added twist of subtle details and uniqueness. This comes in the form of disease manifestations or alternate creative inserts, which can be found in the form of pamphlets, magazines or book extracts in the comic. These features take the stereotypical characters and make them quite personal and appealing.

Bellegarde’s art is simplistic and is not overcomplicated by unnecessary facial detailing or colour shading. Instead it has a visual style, and I mean style as in great panache. The World Corp management scenes are straight from the 60’s and the clothes and haircuts follows suit. The lettering, logos and by-lines are cool and emulate modern graphic design. The current day scientists look unspectacular with regular everyday clothes such as jeans and t-shirts but as the contagion takes over, they become something else altogether. There are characters with a necrosing body, a pale ghost like face, and one with red crustacean like armour. These features offset the 60s look making the whole book look quite exceptional. I have to make special mention to Jordie Bellaire, who once again does a great job of colouring this book. It is bright and colourful and every character is distinctive, this is wonderfully demonstrated by the crew mugshots on the last couple of pages. 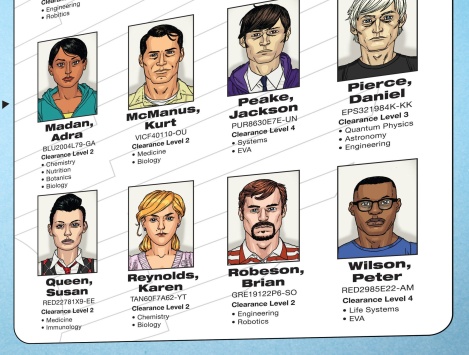 Nowhere Men is easily summarised by the phrase used early in the book, “Science is the new Rock and Roll”. This book is making science cool. It sets an incredible and inspiring time at the inception of the World Corp, where the fab four were going to put the world to right, with their altruistic, energetic and innovative thinking. I can only imagine a company like Apple being in any way akin to World Corp, with the late Steve Jobs being as ambitious as the fab four. This comic has a brilliant opening page where it shows a magazine poll of the 30th annual science awards. Some names are recognisable but there are small details of interest and joviality, such as awards for best-dressed male, best haircut and favourite physical enhancement. The book insert, which involves three pages of prose, gives important details to the breakdown in communication and uniformity of the founders. Despite the two main storylines occurring in differing times and environments and not quite combining yet, the book remains very compelling. It has an incredibly ostentatious vibe to it and only praise can be given to Stephenson, Bellegarde and Bellaire for creating such an atmosphere. This book is the epitome of a cool comic book.