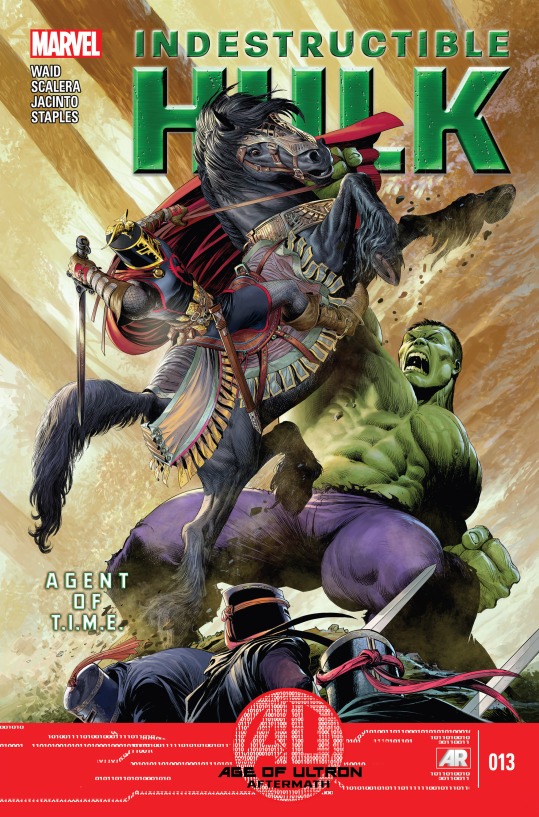 I may be sailing close to the wind by choosing a non lenticular page as my cover of the week, but for the last couple of issues now Mukesh Singh has produced lovely art. The beauty emanates from the page despite there being a huge eyesore in the form of an AoU symbol at its base. The feature of the page is not even the Hulk in full stretch green glory but of the majestic horse in mid leap. The details of the animal are incredible as almost each hair is visible with an expression sold solely through the creature’s eyes. Couple that with the ornate garb and the knight in full regalia, then you have an ethereal warrior trying to slay a giant monster. The rider has amazing depth to his belt, sword, sheath and helmet, it really is quite astounding. One feature which really stands out is the colouring. It is varied and bright and so much attention is brought to the horse and knight, that the indestructible one seems quite bland in comparison. It resembles religious iconography in nature, especially seeing the shades of daylight shining from behind the soldier. The Hulk looks quite turmoiled as he roars from below the horse in quite the uncomfortable position. It is almost as if Bruce is meant to be the enemy as he succumbs to the knight in shining armour. It is depicted as a scene from a tapestry. demonstrating a tale from biblical times of a monster needing to be slayed. Of course this is the opposite to the actual plot but it does not stop Singh from producing a poignant, impactful and epic fight composition.