The Batman Black and White anthology is a collection of short stories developed to showcase the talents of the best creators around. It initially produced four issues in 1996 and then as comic shorts in the Gotham Knights book. It has returned almost a decade later with a further season and collects some wonderful artists, including the venerable Neal Adams.

Neal is a man that does not need introduction because he took comics through puberty and made them mature and socially relevant. It has often been said that he was responsible for transforming the campy comedic sixties Bruce Wayne into the hardened austere Batman of today. I have had the pleasure of meeting Mr Adams at a convention this year and he had refined wisdom combined with the paternal condescension of the legendary forefather that he is. There are few people out there that lay claim to the intimate knowledge and experience of the graphic art format. If you read have read this short story and you know where it comes from, then you can understand why his work is completely separate from all of the other black and white stories. If not, then I’ll you.

It is titled Batman Zombie, which is far from the indulgent genre piece that it implies. Adams artwork is painstakingly gorgeous and the pencilling is so intricate that each sinew and bone of Batman is visible. His pose is weary and his body decrepit as he walks round helplessly. When the speech bubble pleads for help, it is quite obvious to us that this is not a job for Batman. What is interesting is that the people asking for help are not innocent victims of villainy but of society. We have the mother of two who is facing eviction because of a clerical bank error, the recently unemployed father running from a crime scene and the harshly punished imprisoned small fry criminals. These characters are beautifully drawn with the most detailed and aesthetic faces. Zombie Bruce creeps around uselessly and is shameful in his inability to come to their aid. This is etched meticulously into his undead face. However it suddenly transitions into a youthful and exuberant veneer when he sees his old insane adversaries, as he gets to punch them in the face again.

Of course this is all a nightmare and Bruce wakes to call Alfred, asking him to prepare a legal consort in order to make new business plans. Neal Adams has reverse engineered Batman to make a realistic point that Bruce Wayne would be much more helpful to society than Batman. Hence the derogatory remarks of Bruce calling Batman a lifeless burden, which suddenly explains the title of the book. It is an intelligent piece of writing superbly supported by his fantastic pencils. Whether this is deliberately demeaning to the character of Batman or a treatise to the modern day superhero, it is hard to tell. But the tone of the book is perfectly demonstrated by the hard on his luck gentlemen, who is buying eardrops for his daughter, looking at Batman from a grim outlook, praising him for his crime fighting. As the zombie figure turns away from his plaudits, he realises that there are bigger societal issues at hand, than the bad guys that repeatedly escape Arkham. It takes gall to treat everyone’s favourite hero like this and no one would dare demean him so vehemently on his own showcase series. Except for Neal Adams. He is Batman’s and our father after all. This is a refreshing portrayal of Batman and is an incredibly poignant read. 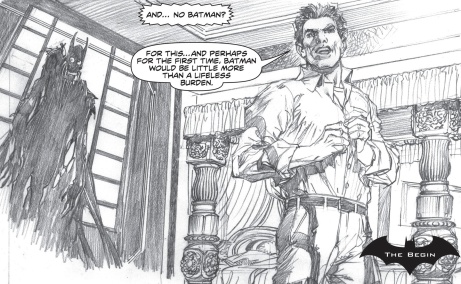 “I can’t do anything…about those socks”