I mean come on, Half Past Danger? What kind of title is that? It reeks of cliché machismo charging head first into battle throwing caution to the wind. And that is exactly what it is, and let me tell you, it is damn good. Though the title did not enthral me, the cover did and Stephen Mooney has dynamic flowing pencils that captured my long lost teenage imagination. This would continue through all six issues and leave me smiling with giddy delight.

Stephen Mooney has drawn a number of books with IDW, including issues of Angel, CSI and the A-team. However on this book he has taken the mantle of creator, writer and artist and even coloured the first issue. That was until Jordie Bellaire arrived and added aesthetic punch to his art, from issue two. It is uncommon to find a single individual perform most of the work on a comic, but this piece is Mooney’s passion project and all bets are off. There are no directions, constraints, or limitations and we witness the results of an artist left to his own devices. He draws what he loves most: beautiful dames, down on their luck heroes, ninjas and dinosaurs. It sounds like it shouldn’t work but it really does surprise you. I was fortunate enough to meet Stephen Mooney at Thought Bubble this year and discussed these very premises. I do not wish to spoil that as you will find that interview appearing on my blog in the coming weeks. 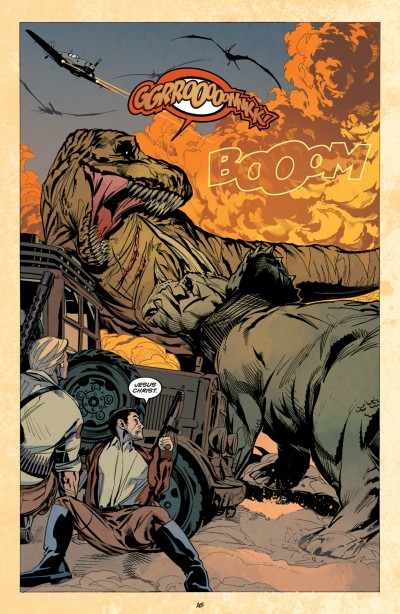 Half Past Danger features an Indiana Jones come Hans Solo protagonist with some serious survivor’s guilt. It is a World War II period piece and Sergeant Thomas Flynn lost his company to dinosaurs. The story is full or surprises as we witness many panels like the one above. His ability to draw ferocity with the use of sound effects and the fully extended, teeth laden mandibles of a tyrannosaurus is second to none. The roar is explicitly terrifying, as everything around it seems to sway in the divergent direction. The depiction of the dinosaur is amazingly detailed and the eyes really add an element of malicious intent. Couple that with the expressions of shock and terrified gazes, then you really feel what the characters do. These confrontations are treated with the respect they deserve and the realism to insight soul crushing fear. 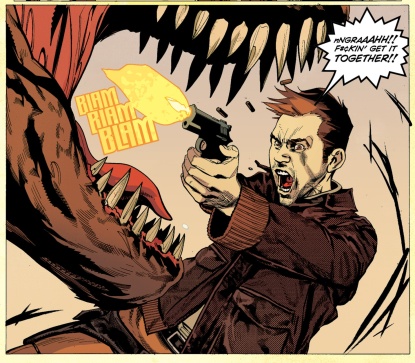 Of course this book is not all about dinosaurs, it is about Nazi’s too. It unfolds that the Germans are cultivating these creatures with an endgame of producing chemical weapons. Thus a unlikely band of heroes enter a bar, fight with Flynn with a view to recruiting him back into the war. We have the tough brawny Brit, the Japanese Ninja and the sassy American dame joining the plucky Irishman. The story progresses with multiple twists and turns and become quite the action packed caper. We see multiple action sequences that involves fists, knives, guns, tanks, trains, planes and boats. There is even a shark in there for good measure. The writing is very succinct and precise because the multiple cinema tropes are at play require minimal explanation, so we can freely enjoy the art at hand. It is strong storytelling with perfect artistic balance. 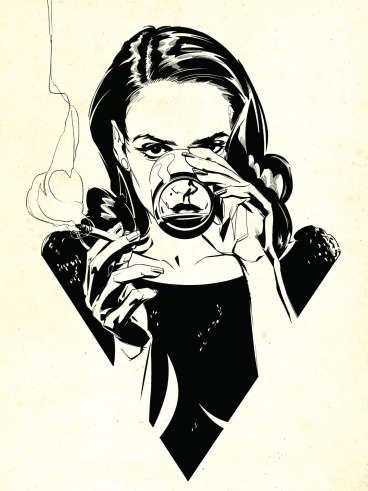 Stephen Mooney has such joyous inking. The panel above is an excerpt from the second issue and demonstrates how much detail and lighting can be achieved without the use of colour. The intricacy of her hands and hair is exceptional but the real brilliance lies with the glinting of her glass. The light literally bounces off the page. Take those skills and bring in Jordie Bellaire and you have a winning combination, because she brings a bright palette focusing on the foliage greens and desert yellows. The environments are also incredibly distinct and allow so much space for creative colouring. I especially enjoyed the red tinting of the submarine scenes, yup submarines too. 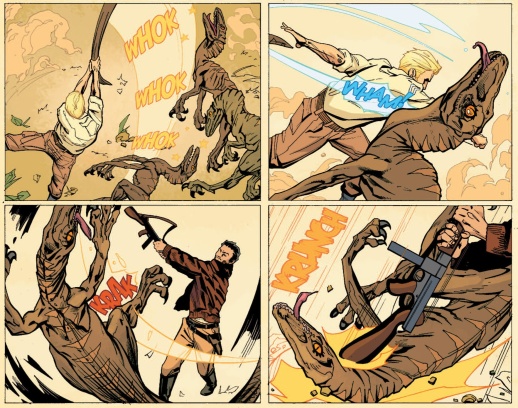 The crucial sequences to this book are clearly the epic action pages. The immense variety of combat allows Mooney to really shine, because he has some of the most dynamic art I have ever seen. His punches are fully stretched, the kung fu kicks are perfectly poised and the bullets are firing at high velocity. He achieves the illusion of movement by adding essential sound effects and emphasis lines very aptly. The key scenes of heroic gesturing, final blows, and death scenes are effective and poignant. The huge variety of environments, assailants, modes of combat and characters leaves you completely satiated. This six-issue run is an action packed fast paced romp with wonderful characters and scenarios, and it reads at a phenomenal pace. There are even subtle moments of delightful comedy.

This book does not weigh you down with heavy exposition or an overtly complex plot, but gives you what you desire in spades. It is wonderful to look at and Mooney’s art is simply gorgeous. His inspirations are clearly from the classic action hero movies of the eighties such as Flash Gordon, Indiana Jones and Star Wars. It is a stand against the pretentious necessity to over complicate and bring uniqueness to the classic concepts. Stephen Mooney takes what he loves the most and draws the holy hell out them. The fact he is his own director means he has complete freedom with his characters and spaces bringing a perfect balance to the book. He brings the cheeky wit of the have a go hero and lets us build our affections as he is tossed from one calamitous scenario to another. Mooney clearly has a strong degree of insight as the book is paced well and not overloaded with indulgence. His sense of direction is clear and precise producing a well written tale. If you leave Stephen Mooney to fend for himself, this is what he produces and goddammit it is brilliant and a helluva of a lot of fun. 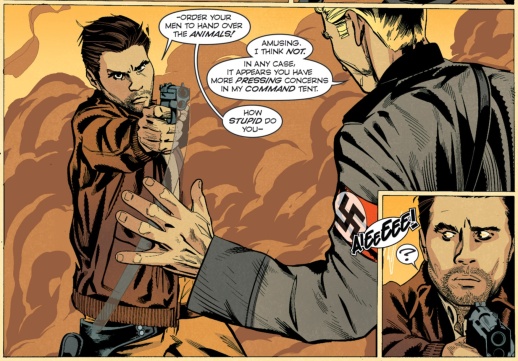