At first I was very confused and lost in a space situated between a dream and a nightmare, but then I started to become quite fond of the beauty around me and I don’t want to leave. Unfortunately Kelly Sue DeConnick is forcing me to because as the plot progresses, the mystery becomes ever so less engrossing and my imaginative enthusiasm in filling the gaps dwindles. That is not her fault because the book does need to move on and the rewards in bringing the characters and plot themes together need deliverance. Her writing on this book contrasts significantly on other DeConnick works I’ve previously read, as there are multiple characters who appear to be mid story and heavily engrossed in emotional servitude. There is a large risk with introducing a book that makes little sense and striving to keep people involved until it develops coherence. I genuinely feel that she produces enough revelation to keep us on tenterhooks, and if that was not enough then her fall back was the absolutely incredible artwork produced by Emma Rios and coloured by Jordie Bellaire.

There are a number of tropes and descriptors that are befitting of this title but none of them adequately describe it. They include the Wild West, Purgatory, Redemption, Fantasy, Terror, Mythology, Witchcraft, and finally Salvation. From what begins seemingly innocently as a western, rapidly turns into something altogether different with a cast of characters that seemingly have no obvious connections. These include a rabbit skeleton, a butterfly, Death, his daughter Ginny, a couple of men called Mason and Coyote, a young girl borne from the rivers of blood and a lot of crows. A multitude of emotions run through these relationships, all poignant yet unestablished. There is a host of anger and regret throughout and a deep sense of loss as exemplified by Death’s daughter Ginny, full of malice towards a despondent and dispirited Mason. In fact the friendship between the bones of a bunny and a butterfly is one of the most refreshing and sweet companionships of the book. As you partake in glimpses of these character’s adventures, you become lost in their worlds and a wanderer in the fantastical realms of Emma Rios.

Kelly Sue may have created the feel of the book but Emma Rios has stamped her style on its appearance. Her work is ethereal with elegance and grace tackling harsh environments and even harsher relationships. There are a few distinct scenes in this issue and Jordie Bellaire is a phenomenal in making them all caress different aspects of our soul. The glowing spring scenery of a hummingbird beating its wings rapidly in the rain, compares to the black shades of hell where Death wallows in sorrow. Her characters are distinctive not only in their facial features but also their posture and stances. She is not afraid to devote attention to the hideous natures, as she does not shy from Ginny’s scars or Death’s goat skull head. In fact the more time you spend with them, the more beauty seeps through from them. Emma’s inking is exceptionally precise but not overtly detailed that is crowds the image, as the details of Mason’s reflection are not immersed in water ripples. There is a beautiful fight between Ginny and Mason, which occurs splashing in water and is expressed through small closely focused panel boxes sitting atop loose landscape overviews. It moves quite fluidly and feels more like a movie reel focusing on different focuses of a fight. Each page is emotive from the scenic tones of the story but also from the relationships presented. You can immerse yourself in it and let loose your shackles. 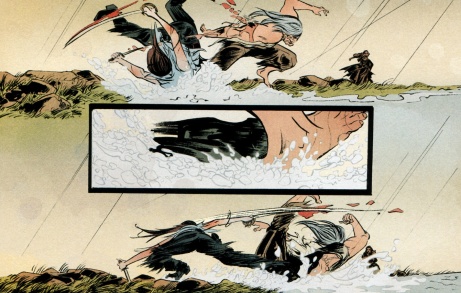 This triumphant trio afford you the chance to use your inspirations and draw on past experiences to empathise with the emotional strains of the book. Such as a person deeply cared for so much, that you cannot imagine ever being allowed to fully express yourself to them. It is a love lost and difficult to fathom and it can engulf you at times. It conjures feelings of joy and sorrow but if delve deeper into the melancholy, you can just about make out what might be coming. This issue certainly starts to tie things together as it drags you back from the abyss into the realm of continuity and story. There are some readers that have found the book difficult to follow and it frustrates with its lack of cohesion. But that is far from the point of these initial issues, as you should revel in the deeply emotional exploration at hand. This book is cathartic in its nature and it is more about the journey than the destination, as the courage and determination to get there is the theme of the entire run. It plays a wonderful parallel with Kelly Sue’s intimate monologues at the end of each issue. She bears her soul and creative process and you can begin to understand where Bunny bones was borne. As the book progresses I imagine it will engross you in a complex and intriguing story, which will be beautifully presented. However I hope I do not find myself longing for the mystery and fascination of this surreptitious creation I currently adore.

“Can we just be quite for a while?”