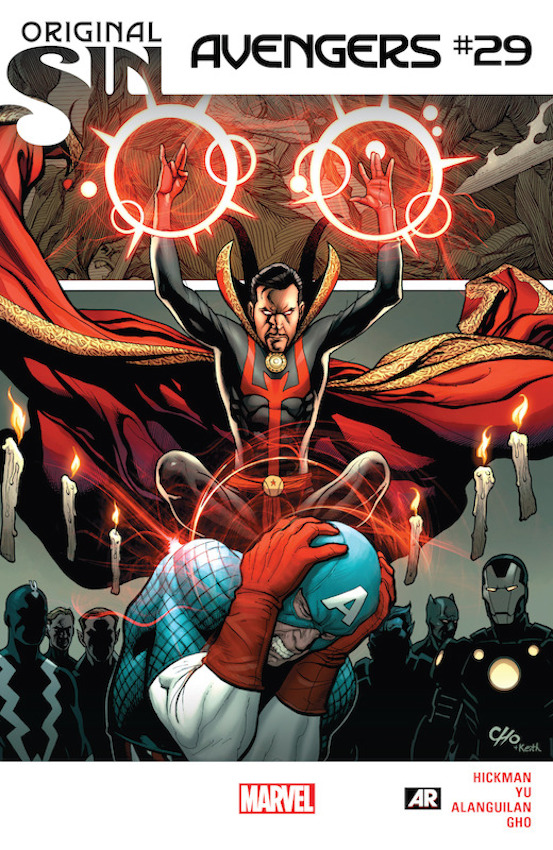 It is not often you will hear me discuss Frank Cho’s art because I am far from a fan of the cheesecake style. However his art is actually pretty good despite the fulsome nature of his characters, he does bring out the intensity. This cover depicts an epic moment in the Hickman Avengers run from its very inception. Captain America tried to prevent an incursion and failed and was barred from the Illuminati in an aggressive way. Stephen Strange is depicted here removing his memories of the event whilst the other members stand by and watch. The high ideals of Rogers would never manage the big game moments of life and death when there is no ethical platform. Dr Strange is draw quite meekly from a physical perspective which is quite realistic if you consider he is a mystic and has no need for physicality. His powers are demonstrated by the glowing lights emanating from his hands and the candles surrounding Rogers. The effect on Cap’s mind is reflected by the red rings and how he grips his head in pain. The area is quite dark but you can make out the grimace on his face as he feels recent events being torn away. The greatest part of the page is how sinister the Illuminati appear as partial silhouettes in the background. The shape and subtle lighting allow us to appreciate who each is but their expressionlessness is key to their indifference and approval of the actions they bear witness to. I also like the white Original Sin headers, especially the white colours symbolising purity and their cutaways revealing the picture underneath. Unfortunately I have no idea what the black and white running horses are about below the title hear above but it does not look out of place. The cover is well coloured by Jason Keith as he brings out the flashing lights of magic in comparison to the treason depicted below it.