I was going to comment that Warren Ellis is a high concept writer, but then I realised how much I hated the word. I actually researched its definition and found out that there is some dispute over it, which subsequently re-affirmed my dislike of it. So how would you go about describing Mr Ellis? Intelligent? Original? Complicated? Socially Aware? Perhaps that is enough because his work may not be extensive or maintain longevity but it is memorable. This is certainly true of Transmetropolitan and Planetary, which are both fantastic graphic novels. Warren Ellis has the impressive ability to sell you a story so compelling and engrossing that it is hard to put down, once he has allowed you to get your head around it first. His writing is wonderfully adept at conveying characters that are not only recognisable but twisted ever so subtly to veer in a new angle that you have yet to appreciate. The pitch line for Trees would read something like, “A post alien invasion comic of the world under silent observation”. This is far from a unique idea but its execution is glorious, especially as an opening issue. 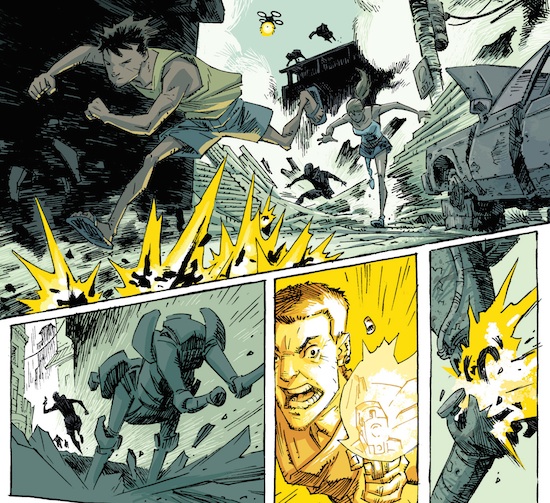 The book is set ten years after the arrival of a foreign piece of technology, which adopts the form of tall columns reaching to the sky, hence the title of the book. There are several cities that host these structures including Rio, a Chinese city called Shu, Spitzbergen in Svalbad, and inevitably Manhattan, New York. We switch from one destination to another as Ellis begins a discourse on how to manage these alien trees. It is worth mentioning that even after ten years, not a single person has a clue about whether there are actually any aliens behind the trees, because no one has come close to making first contact. In fact they appear to be invulnerable and indestructible, but every now and again discharge toxic waste from their crop circle like pores. It’s quite the terrifying predicament but actually it isn’t really because after a decade of patient investigation, the world has accepted these Trees as part of the natural climate. Their acceptance brings a sense of foreboding and terror that come not from the aberrations to normal life, but at how the resident population has come to deal with them. This is where the true delight of the comic is found as Warren Ellis succinctly and expertly writes about the human condition and its responses to fear. 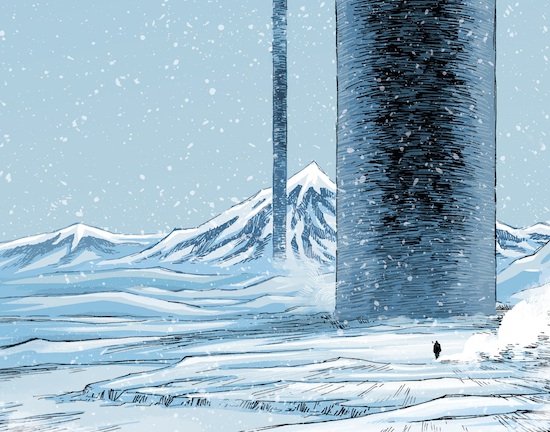 When most comic books are divided into sections to give an array of characters of scenarios, it can appear diluted. As soon as we garner interest in the story, attention moves elsewhere, but in opening issues this less important because the scene is being set. Where Ellis really thrives is each city he focuses on is completely different to the next, and between all four he covers various aspects of human life. In Rio we have the rebels that appear to be running towards the pillars and being chased by a very aggressive police force. The impression that it is a futuristic book is maintained by the advanced weapons on display, against essentially disarmed youngsters. There is also a subtle commentary on drones to be found here. As we move to Manhattan, the exposition is more focused on the political posturing of the mayoral elections and political developments. In the small island of Norway there is a relatively normal situation where a scientist base is investigating the Trees there. The most impressive situation of all is in the city of Shu, where Ellis is clearly commentating on Chinese life and culture. The tree is completely segregated to the civilised world and there are barriers and guards that police it. People are allowed in and out but there appears to be a free state to be whoever you want and act however you like. It is busy, it is wild and it is full of the strange, weird and the slightly deranged. What is actually happening is that this is a place for those who wish to live under a different rule, to be allowed to be themselves. Unfortunately this appears to be a haven for illicit drug use, atypical sexual behaviour and some form of Tree cult members. The writing is so impressive that the story avoids a straightforward narration but expresses through the people themselves and the actions drawn by Jason Howard. Ellis is an expert in dismissing the classic information dump, and the conversations had are so natural that they well paced and actually quite believable. The Mayor talking to his campaign advisor is the most wordy part of the comic and is still very intriguing. Howard is allow a free reign to draw this dystopian future and when in Rio, reveals horribly brutal violence and a dynamic and exciting chase sequence. His work is best demonstrated in China, as we recognise the disinhibition of Shu city through the eyes of a naïve school kid wanting to practice his art in a new environment. It is a fantastic writing strategy and Tian’s expressions are priceless as he walks from one unhinged person to another. Jason Howard’s colouring is exceptional from one place to another. There is a droll and bland colour to the normal environments that have been artificially created as a result of the Trees. This bears the hopelessness and terror of daily life, but there are flashes of colour that highlight a spike from the drabness. In Svalbard we see the freezing whites contrasted with bright orange coats of the scientists at work. The explosions and chemical discharge of the trees are bright in yellow and green colours. And then, as you can imagine, the whole of Shu city is bright, colourful and vibrant, as it teems with life. 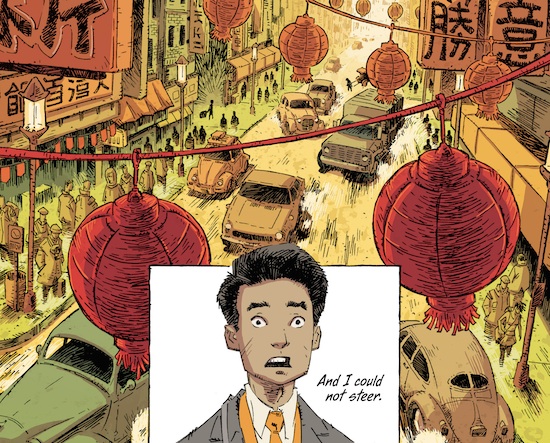 The pertinent message of this book is nothing to do with the Trees, it is about us. This is evidenced by the fact we are given such little information about them. We are exposed to a world that has responded to the threat in many different ways over the past decade. Warren Ellis is not only masterful in his grasp of language and how to use it, but also his understanding of people. He may write succinctly and allow Howard to express the story artistically, but his direction is where the book really stands out. Whether it is the reactionary over aggressive stance of Brazil, or the infrastructural breakdown of New York, or the encasement of the non-conformists in China. It is almost a deliberate ploy to have an alien invasion without the invasion, as he makes it clear that whatever has landed has no intention of interacting with the indigenous population. This high technological threat that imposes so vividly but completely ignores the supposed civilised world we have developed. It is almost insulting that it chooses to defecate its malign waste onto our once glorious cities, whilst not paying any attention to us whatsoever. It watches as the developed world crumbles in the face of a superior entity, in ways that would appear abhorrent and despicable to the people ten years ago. Warren Ellis and Jason Howard have produced such an exceptional comic that delivers in every aspect necessary for an initial opening issue. There is no obvious hero or villain and not a single person to put our hopes onto, because that is not its intention. Even the likeable characters are there to provide contrast with, was opposed to being hopeful for. This is the beginning of a new story that has to bear the frustration and angst of a new world order, and this issue devotes its time showing the world as it is. And that is done so perfectly that I do not even care about the Trees, because I am so captivated by the people in the book and I just want to see where Ellis takes them.