When I initially started doing these types of posts, I had to learn about how and why certain aspects of the comic were successful. As my knowledge increased I realised that there was more to it than I had ever appreciated. My adventures into colour then revealed how intricate the relationship was between penciller, inker and colourist. Now when I write these posts I am unable to separate out these properties of the comic, especially when it is blended so impeccably and seamlessly. This is the case for Manifest Destiny, with Matthew Roberts on pencilling and inking and Owen Gieni on colours.

The book is in a world in and of itself because it combines a couple of genres to produce a comic like no other. The title itself is a reference to American Romanticism and extending an area of freedom. The idea of pushing your boundaries and putting forward the ideas of your country is the basic premise. That notion is combined with a sense of adventure and discovery of creatures that threaten their very existence. This is where the creators have a chance to shine. It is worth mentioning from the outset that Roberts has a refined attention to detail and had placed a lot of emphasis on exaggerated expressions and thoroughly researched into weapons and the garb of that era. Gieni has a rich and lush colour palette, focusing on the deeper and more saturated shades, giving the book immense character.

The environment is a temperate verging on tropical as the crew venture forth into a variety of landscapes. There is a delicate balance of inking and colour as the land is mapped out by Roberts but the temperature and texture is developed by Gieni’s colours. The panel above shows a variety of areas all coloured with watercolours of varying shades expressing the water, the sand and the trees around. The sunset approaches giving a glorious deep red and purple hue, and the light shines on the landscape through delicately thin white lines. It is a really nice touch and the amount of effort placed on one of the smallest panels is incredible.

As we move towards the characters themselves, we can see the same attention to detail is applied. Matthews draws the most distinctive characters and this panel shows the stark contrast between the chiselled chin, stern looking, burly façade of Clark and the slack jawed, sloped shouldered yokel Charbonneau . These cardinal features are emphasised in order to bring out the personalities of these characters. You can instantly tell who has the honourable and dishonourable persona, which fits perfectly well with the writing. The colouring of these two panels is very intricate and even before you look at the central aspects you will notice the subtle colours of the rocks and vegetation. There are specks of oranges and greens showing the moss and the refining white lines, once again bearing delicate reflections. Both Charbonneau and Clark have immaculately coloured faces, where the shade from the hats tint the skin, masking from the sunlight that has clearly causes some burns to their skin. It is impressive that both these characters have clearly different complexions, almost representative of their personalities. 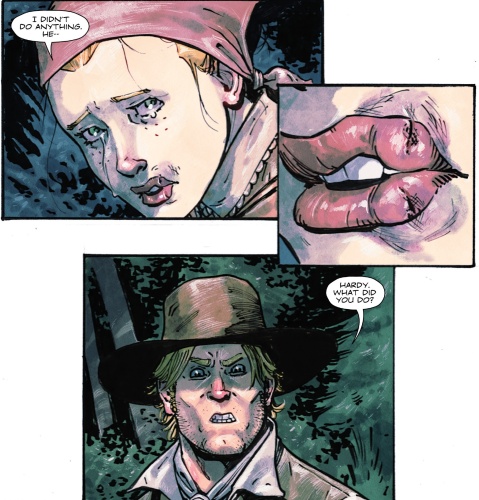 The expressions alluded to above are key to the comic and instantly portray the story through the art alone. The focus on the above panel of Irene’s lips clearly tells the happenings of the previous issue. Her sorrow and guilt is rife through her sullen eyes and tearful gaze. The switch to the Captains anger is deliberate and appropriate, as he grits his teeth and focuses his stare at Hardy. The creases around his cheek bones are accentuated by the shades of pink of his face. It is incredibly expressive. Combining these artistic merits gives a comic that relies on known stereotypes to portray a type of character. We know from Clark’s normal demeanour that he is a tough and stoic character, where Charbonneau is a layabout ruffian. The plot then develops and we are able to see how they respond, and for the most it is as expected. Especially when it comes to reacting to the sheer terror of the monsters they encounter. 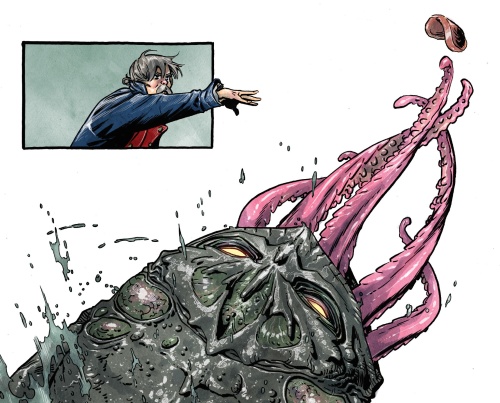 Matthews’ creations are exceptionally hideous, as we observe the mutated toad jumping into the air with it’s tentacled tongue trying to grasp a thrown cap. In context, it is a scary page because that creature guards the water and limits the crew’s movements. Once again the intricate pencils and the shaded murky greens of the animal’s skin make it quite gruesome, but also quite beautiful at the same time. The degrees of symmetry in design and colour is actually quite aesthetic. The same level of detail we see with the crew is equally applied to the monsters and this is what makes it quite realistic in its portrayal and responses. It is uniform throughout and when the characters see the unexpected, we also do too and react similarly. So when Clark falls down with a red spike appearing out of his back, the reactions are that of shock and horror. All the crewmates are distinctive in appearance but react in a consistent manner, and Clark just looks terribly unwell. You can once again appreciate the texture brought out by the immense work put into it by Gieni.

It is very pleasing that the writing is on a par with the artwork, but the themes of the book would resonate nonetheless. It is a great writing tool to be able to have the artists take the pressure of character development. The book has such depth and emotion that the feelings reflected are emphatic and true. Manifest Destiny took its time to reveal the horrors that lurked, because it devoted time to set the scene and allow the characters to breathe. The stark contrast between the beauty of the brand new world and the sheer grotesqueness of the animals that lived in it, makes the reveals all the more terrifying. Where we once joined the crew in exploration of glorious new lands, the book now it relishes it its true purpose, to fright and to panic. The final panel is testament to that because all the artistic traits described above are utilised, and as you turn that page be ready to be disgusted and a little scared.