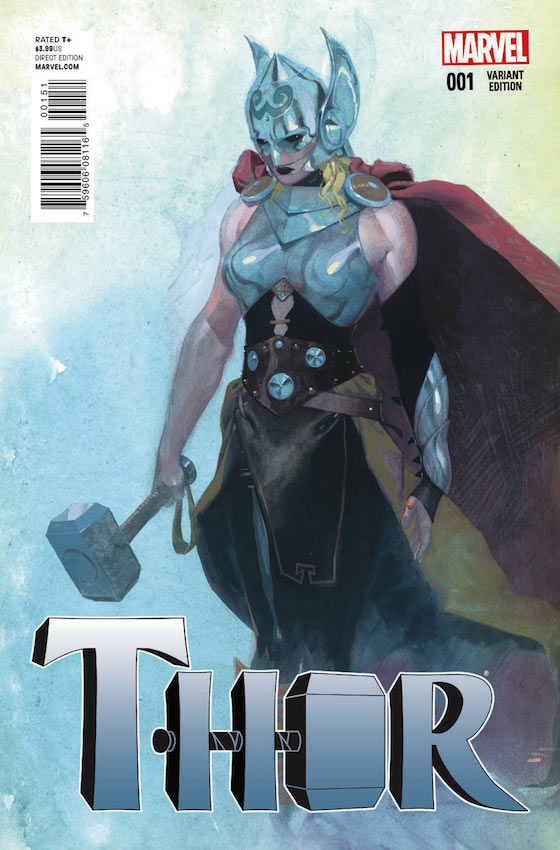 I can only apologise to those who are becoming a little weary over my compassionate declarations for Esad Ribic. This comic has been…well there are plenty of descriptors used by myself in many posts. I run out of superlatives for an artist that brings such grandeur to a God but quite simply he was perfect for Jason Aaron’s Thor. And as Jason reimagines the mythos of Thor, we welcome a new artist Russell Dauterman, who actually provides a fantastic and electric regular cover for the book. I see the variant cover as a fond farewell to the previous volume and a giant hurrah for Esad Ribic. In characteristic style he keeps the new Thor glorious and celestial, with an image that would fit into the paintings of God in any European museum hallway. The watercolours are beautifully rendered and complementary with bright and textured skyline background. I quite like how the cape brings a shade to the darker aspects of her outfit, its a nice touch to have a realistic image that isn’t just promoting her new clothing. Thor herself has a wonderfully designed helmet and armour, reflecting the bright lights with vigour. It is a very interesting helmet because its not often you see Thor with his face covered, this is clearly for storytelling purposes. But it builds a mystery behind who this character is, especially with the blank expression that Thor is here to fight for what is right. If you look at how important Mjölnir has been to the plot then it will surprise you that it is not accentuated at all. Thor carries her hammer as if it was just a part of her armour, nothing more. If you remove the gravitas of it then it brings the legend back down to Earth, meaning that it is not the weapon that makes Thor but the person themselves. There will be no cavorting or drunkenness but the matter at hand will be attended to diligently. Her pose together with Mjölnir is the most telling aspect of the cover because there is no showmanship or self promotion. Perhaps she is keen to keen her identity secret or she is worried about living up to expectations. But her time to be tested will be rapidly approaching and they are some mammoth shoes to fill. After all, heavy is the head that wears the crown and it no longer sits upon Esad Ribic. Fare thee well.