It is not just the fact that this issue was silent that prompted a post dedicated solely to its art. The comic was exciting and moved so rapidly with the added tension moments to give you time to breathe and to absorb what has just occurred and what is to come. The set up is simple, Xiaolian bathes whilst an army of assassins that come to murder her. They are brought out of a comatose state within a delivery container, and readied for action. One of the first images we see is one of them running headfirst with purpose, seemingly in our direction.

The sense of perspective is perfectly calculated as they are in proportion from all angles. Their postures are that of one hundred metre sprinters, almost horizontal as they move but it is the fluidity of the panel that is key to its intention. The specs of black that are elongated represent the marks on the floor that can barely be seen as we move with these  killers, but also the thinner lines depict the arms and legs in motion. The shadows on the floor have barely any time to register as they change shape with their source. As they rush into the Mao’s quarters bowstrings ablaze, the arrows kill her maidens leaving them floating in the bathing pool.

This image is representative of the danger in numerous ways, let alone the harrowing lifeless glare of each of her handmaidens. The arrows are in particular prominent positions, either in crucially anatomical positions or narrowly avoiding Xiaolian. Her own image is one of fear and concern as she stares into the eyes of her aids, but it is her appearance that potentiates her vulnerability. Not only is she naked without any protection but she is underwater and must come up at some point to take her breath. The blood dissipating through the water below the shadow of the assailants only brings immediacy to the threat. Her rise from the pool straight into an attacking position is impressively handled. Not only is she fearless but her strategy in defence is impressively spontaneous, as she twists the neck of an attacker and flips him into the pool. 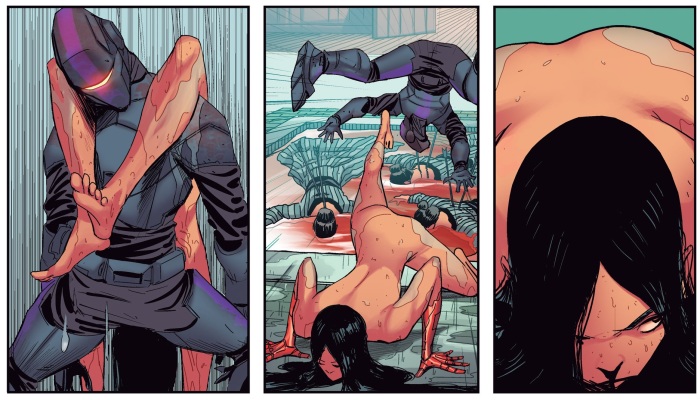 The sequential panelling process is not as fluid or dynamic as you might see elsewhere but the intentions and movements are clear. The movements are shown from a single angle but slowly zoom into her face. As she lands, her eyes are menacing and rapidly assessing the surrounding threat. The next few pages depict further action with each bowman neutralised in various ways. Dragotta deliberately shows these motions utilising different dynamic techniques and panelling effects. The following image shows an inversion of portrait to landscape, as she captures the blades with her bare mechanically replaced hands, before snapping them in a close visual that shows an eye with focal intent.

The use of silhouettes is also employed to rapidly show stills of interactions and repercussions. Martin uses the prominent contrast of black upon red to impress the violence and bloodshed of the confrontation. We see the motion lines again showing the pace at which the strikes are made but as the blood drips it is deliberately made less slow and precise. The shapes are incredible as the reversed colours play an amazing role in expressing the fervour and magnitude of the brutality.

Amongst these pages are still splash pages that bring pacing to the book. The provide momentary pauses to reflect upon the fight and build the tension to the next direction. The image to the right shows three assassins all moving towards Xiaolian as she wields her sword. The image is amazing at showing the current state of play with the pool being bloodied red and two antagonists already dead. 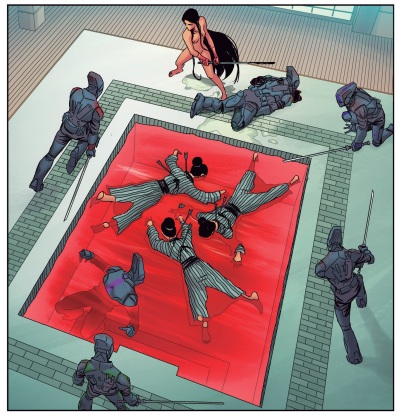 Her hair is particularly impressive as it flows behind almost with its own intentions. Once again her nudity is quite apparent but is slowly becoming less of a hinderance, with her vulnerability becoming less and less of a disadvantage. As we move towards our final panels she is completely in control and comfortable where she stands. It is amazing how Dragotta does not sexualise this at all and her warrior like pose bears confidence and intimidation. Her sorrow and regret are worn on her face as the black silhouette of the blood runs down her hands. The final two henchmen are mutilated and left gawping as the last semblance of life leaves their carcass. The black and red lines of the background only accentuate further the horrific nature of the scene we have just witnessed. As much as we may be pleased at her success, the vengeance she has brought is truly terrifying.

This issue was awe-inspiring in its ability to show a fight scene with purpose and intensity. Not only is the sequence shown in a variety of ways but there are moments of pure intense violence and genuine horror. Despite there being no lines of dialogue, there was no doubt as to the thoughts of Xiaolian and her feelings at being besieged. Her response was effective and immediate without hesitation, leaving a room of bloodied corpses and further vengeance firmly on her mind. There are further pages that demonstrate the consequences of this despicable action and the recent proposals for peace are very much in doubt.  This comic was a beautiful example of the artistic merits of both Dragotta and Martin working wonderfully in unison to deliver an exceptional and meaningful confrontation.