*Technically I guess there are spoilers ahead*

Writing about pregnancy in a comic is rarely seen, especially in superhero books. It is a very interesting concept to bring to a story because essentially it negates the ability of a character to do what they can normally do. This is especially the case when, for expressive purposes, pregnancy is almost always depicted in the later stages so there is more of a visual impact. In this case, Jessica is almost at term and is attending a space based

maternity unit courtesy of Carol Danvers. This is where Hopeless sets up his premise and tackles the exact situation I refer to above, stopping an alien attack. This is where a regular one-page encounter, given the uselessness of Skrulls in this case, becomes a four-issue story arc. Spider-woman tried her utmost to avoid a physical encounter to protect her unborn child and uses the facilities and her fellow patients to outwit the adversaries. It lends for some innovative ideas and clever writing, and has been the standout aspects of the first three issues.

The internal monologue is judiciously used to convey thoughts and maternal instincts that the majority of readers would not have considered. Jess struggles with her anxieties about her baby but also the wellbeing of her fellow beings, especially when under normal circumstances she would be in complete control. Her vulnerability and steadfast expectance to be the hero, makes Prince Dirk’s heroic acts all the more impressive and courageous. Given the prince is the reason why the Skrull have come to the hospital, he takes responsibility in aiding her escape and her personal safety. His adopted husband role extends to communicating with Captain Marvel on Spider-Woman’s behalf and holding her hand during childbirth. Dirk’s youthful innocence with regards to not only a woman in labour but also a Skrull invasion is conveyed with impressive humour and sweetness. It offsets the central theme and brings a calmness, if not reassurance to the story. On the one hand you have blissful ignorance with Dirk and intense concern on the other with Carol, with Jess the pragmatic mother to be in the middle. 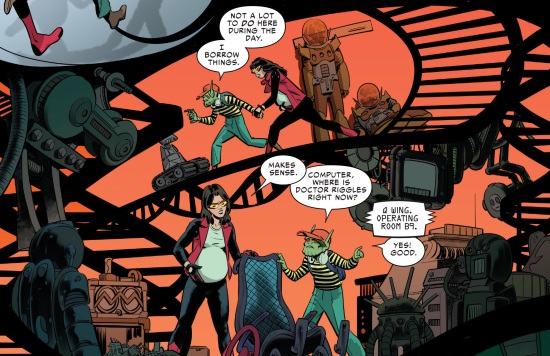 Javier Rodriguez has settled into his role and has begun to explore interesting techniques in storytelling. This particular issue almost serves as a portfolio because of the multiple ideas presented within. Dirk’s adventures through the supply closet and turbo lift are wonderfully depicted as Rodriguez loses all panel boundaries. There is a clear direction on the page and the backdrop is one giant map, which features our characters travelling along it at different points. It allows for further exploration of the environment and more freedom of movement for our characters. This technique is even employed in the fighting scenes where a splash page depicts snapshots of multiple confrontations all rendered in a giant composition. It purposely sacrifices a natural flow for an image that affords investigation into its details and entertaining acts of violence.

Javier’s panel work have also some intricate details that really enhance the reading of the comic. He utlises a four by four and a three by three structure to good effect. The scene with Captain Marvel showing her frustrations at being unable to help her friend moves interestingly. Initially we begin with a torso shot and then it progresses in closer to accentuate her anger by her facial expression, and then in the way she crushes her phone. As it finishes with another torso shot, you can step back form the page and notice that the central three panels can combine to give a single image of Carol, in an extreme state of anger. It is a well-structured page and a great example of the utility of a nine panel page. The sixteen-panel page is used to show Jess undergoing a caesarian section to deliver her baby in a very tense scene. All the while Jess is in varying states of concern and worry, her adopted husband has one eye on her and one on the door slowly being lasered open. In fact my favourite panel of the issue shows Jess on the operating table with Dirk holding her hand, and the only lights are from the circle of sparks coming from the door and the operating lamps. It is almost all in silhouette but it portrays instantly the calmness of the obstetrician, the inherent worries of childbirth, and the concerns of a couple about to face imminent disaster coming through the door. It is an incredible panel and essentially summarises all of the themes of the story arc.

There is a glorious coherence with the creators of this comic and the final pages are very intuitive and sensitive to the mindset of new parents. The conversation between Carol and Jess is sweet and the uncharted territory of motherhood is treated with ironic humour. What is more important is one of the more subtle underlying themes of the book: guilt. Carol suffers the sadness of not being able to be there for her friend in her time of need, in avoiding an alien confrontation and for helping her give birth. Throughout the internal monologue of the series, Jess is concerned for her baby and suffers guilt at not being able to be the saviour but also a calm and stable mother. Through all of the action, it is easy to lose sight of the fact that Jess required an emergency operation to deliver her child. Carol feels responsibility for this even though Jess has a stoic approach to the whole situation; everything turned out well in the end. I am sure many parents have thought about their children the way Carol and Jess do but it represents the wholehearted responsibility for another completely dependent human being and the intense emotions that come with that. Further insight on the story is found upon reading the letters page with Javier and Dennis both experiencing fatherhood for the first time during the creation of this title. This has certainly lent to the depth of the story and the reactions of our characters. And as we finish the book both Captain Marvel and Spider-Woman contemplate the idea of having a normal lifestyle in order to give the child the best chance of a stable childhood. What is interesting is that as a parent, there will never be a normal again, even if you aren’t a superhero.