As with every new no.1 comic on the shelves I look at the creators first, and if that wasn’t enough to spark interest, I turn the page to see if the art makes me want more. And this is what I saw: 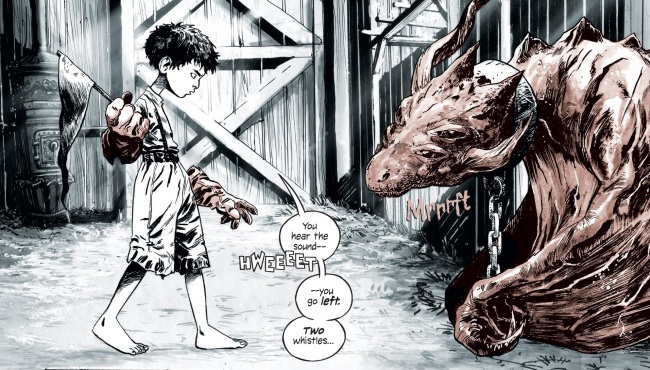 There is a wonderful feeling to the panel with an appreciation for depth and light, yet full of intent and emotion. The rendering in the background breathes delicate life into the barn providing the daylight, the essentially grayscale scene needs. The shading on the wood in a diagonal direction depicts the angle of the sun and the hatch from which it appears. This level of background detail is commonplace throughout the comic in a variety of situations. The line is deliberately less finite because the central characters require that prominence. Enrico, the young boy, stands in profile with incredibly clear intentions and definitive characteristics. His frame is so small and fragile with this shorts hanging baggily around his knees with such excess that they cast a shadow on his leg. The creases on them are fantastically adept at demonstrating their size, and as we move to his waist you notice it is fastened tight and gives an idea about how small his frame actually is. His torso and shirt are more fitted allowing his long neck to poke out and support his oversized head.  He is obviously drawn exaggeratively to provide additional aesthetic texture to his character, even his enormous gloves give an insight to how small his hands must be.

His posture is also interesting as he stands tentatively with his weight on his front foot, as if to be ready to step back without hesitation. His head tilts forward with his eyes looking down. There is an ever so delicate furrow to his eyebrows that shows intent towards his target. The heavy gloves infer a degree of danger and the flag that dangles implies a form of training or ritual. Then as soon as you follow his glare you completely understand why. The dragon is drawn and coloured with phenomenal detail showing every crevice amongst his leathery scales. It is incredible how the rendering and shading follow the light along its back and forehead. His incarceration bring safety to the scene and explains Enrico’s nervousness. The dragon has a tilt to his head that implies inquisition and assessment of danger. Instantly you understand that Enrico is trying to tame this dragon and potentially train it. There is no indication of torture or punishment because he is only armed with a flag. You can easily imagine further that Enrico is your classically skinny child bullied by all, feeling lost and alone and decides to take on a daring challenge. If he could tame a dragon then he could gain some acceptance in this world, so he remains determined .

There is just so much storytelling in just a small part of a single page. These touches are found throughout this book and there are more panels that accentuate the attributes of Ortiz and Fiumara’s artwork. The following is a wonderful example of detailed beasts with a background that is succinct and allows the attention to focus in the action at the heart of the page.

Note the rendering on his mentors face compared to Enrico’s. It is weathered and older but also his skin colour is definitely darker, though with the use of lighting it is hard to say. But the narrative would certainly dictate that. The following panel shows the elements of the above pages but brought to a city scene:

It is impressive at how the time period is shown in the architecture of the buildings, the style of cars and the dress of the people. Once again the rendering brings a milder outline to the scene where the people are more clearly outlined. There is so much detail in this incredible aesthetic that you can study the page for ages. Even then you might fail to see Enrico running through the crowd, once again highlighting his seeming insignificance to the people around and the city at large.

The story brings important background to Enrico, in that his father is no longer around and his mother is partnered with a rather despicable man. An altercation at the dinner table brings a violent strike to Enrico’s petulance. As his new paternal figure demands an apology, the page moves instantly back to the barn scene:

The resignation and disappointment of an act yet to be committed, is quite clear. The initial panel almost hides what is about to happen, to give the read a split second to consider what he is about to do. No longer is there a flag but a notched whip and the dragon we initially saw is about to suffer the wrath of the angry stepfather. It is here that we can see how Ortiz shows the development of Enrico as a man and also as a dragon trainer. His glare is more menacing as he imagines the vitriol he felt when being set upon. The impact of the strikes shown with the movement lines and the noise effects, with the most sharp and cutting font you can see. Enrico is enraged and his hair is erratic, demonstrated with some interesting shading, especially around his eyes. It appears that this time the training is happening at a time bereft of light. The effect of having his aggressor above him not only lets us imagine what he is thinking but also compare the facial expressions. It is almost sad that Enrico takes out his aggression on the dragon but there is more to his motivations that pure anger resolution. He sees in him the life he refuses to live and a man that he will not replace his own father. Dragon training will be his way out of this situation and a livelihood he wishes for, and interestingly, Enrico needs to be more disciplined with the dragon. So this imagery serves the story in multiple ways and brings the issue to a close with a new direction for our young protagonist and an aspect of his personality brought to the forefront.

The final panel contrasts magnificently with the first and speaks volumes about the events of the issue. Ortiz is masterful at exaggerating physical features to accentuate expressions, but still keep the book realistic. The expression on Enrico’s face is quite  intimidating and almost unlikeable. And then you see his tear. He has gone to a place he never wanted to but desperate circumstances have left him with choice. It leaves you wondering whether his future is destined to follow his loving father or potentially the vicious sympathetic stepfather to be. Whatever happens, be sure that it will look amazing and read with intensity. 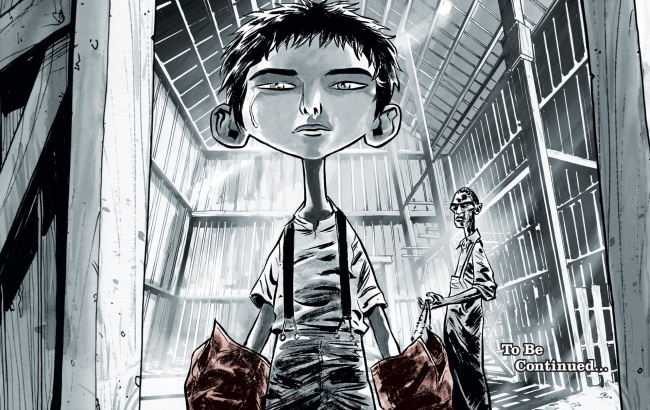