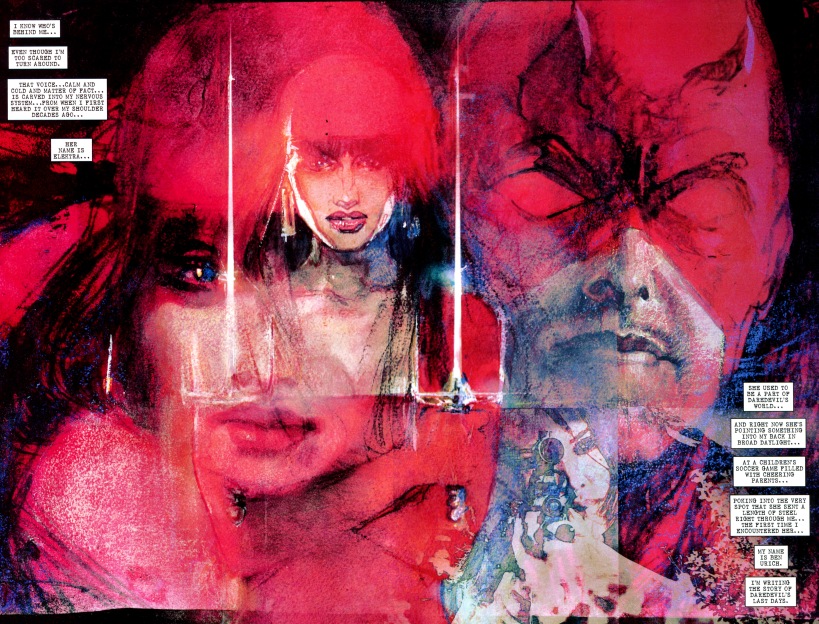 David Mack came to my attention long ago when I began my comic pilgrimage, and I read the Bendis Daredevil run. His art is beyond compare and a very different style to everyone, as he loses his panels and creates layers upon layers of art. The double page spread above shows two former lovers and has images dispersed showing the past life of Elektra. The two pages can be looked at for long periods of time as you can see something different each time. It is not just the other images that strike you but the way the colouring is so varied and you flow from a set of shades to another. Its a palatable art style, you feel the painting. This takes me to the concept of art and how comic artists share a niche in the art world. David Mack is a painter and is credited as so in the comic and the way he paints works so very well in comics. He crosses those boundaries and corners spreading his wings through different styles, he is neither one or the other. If you can manage the broken boundaries and the ethereal visions he creates, then the raw energy will leap at you. I must make mention of Bill Sienkiewicz who is David Mack’s collaborator and heavily involved with the work shown here. The featured image of this post is a large single page, and portrays despair and grieving of Elektra at Daredevil’s tombstone. Once again the colouring is dynamic and her posture and face show her emotion. The backdrop behind the tombstone seems to emanate from the tombstone and Elektra and create the cemetery scene. 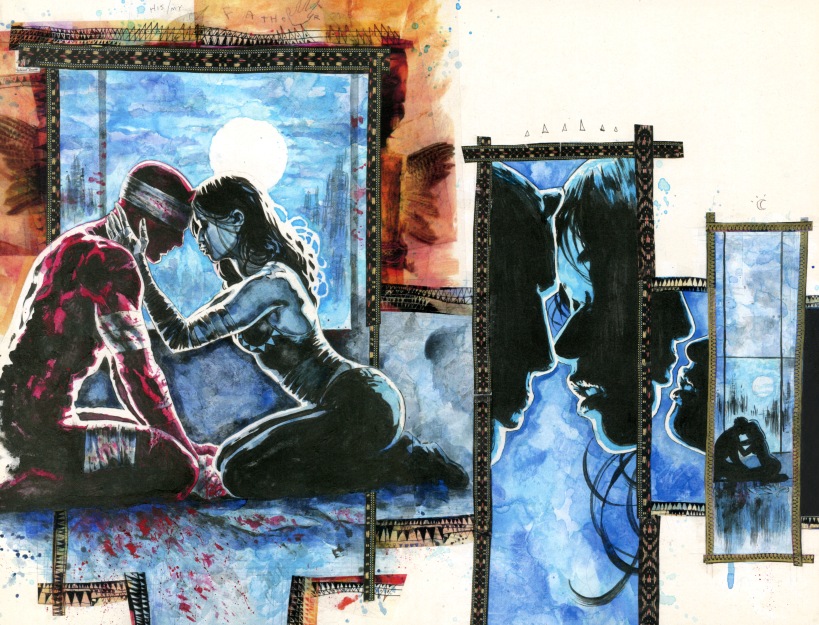 The image above could be described as more conventional in the fact it has panels, so to speak. The injured Daredevil is embraced by Echo and their postures and position of their heads speaks volumes of how sad Daredevil is and how concerned Echo is. The blood from Murdoch seems to merge into the floor and foreground whilst the moonlight shines onto Echo into the background. The characters are at one with their surroundings and then they embrace as one. Their faces are cast as silhouettes with little details on the lips as they kiss whilst then zooming out to reveal the clear night. Even though there are three panels, they are drawn as picture frames with colour seeping from them, almost as if by mistake. The scene is barely contained in the borders and their colours fade into the background further. David Mack’s art is wonderful and shows how the imagination and emotion have no constraints. This is an exceptional gift for graphic art and I imagine for creative projects not confined to the comic spectrum, and I give massive kudos to Mr Mack.