Joe Martino set up this comic as a Kickstarter project, after his battle with kidney cancer. As a writer he has worked in the independent scene for a number of years and this will prove to be his most personal project. It reflects his loss of innocence and the realisation of how fragile the human condition is as we slowly grow older. Joe has taken his experiences and diffused them into a classic superhero world. We welcome Titan to the superhero ranks and his home city, the very real windy city, Chicago. He brings in Luca Cicchitti who is new to the world of comics with Keith Betancourt on colours. It is not often a book sets its stall out this early, let alone attempt to tackle an incredible difficult and important topic. I guess that is the nature of the Kickstarter website and how this book has come to fruition. It lends for excitement and a small amount of anxiety as we begin this ever so intimate journey.

The set up is pretty good, we have a city in which to stage our story and it is a well-recognised one. I have tried to Google some of the references in the book to see how true it is to Chicago with decent results, especially the police station which is exactly drawn. I appreciate the detail here because it is not just another generic metropolis; it is relatable and sets an instant background. The plot plays out in a straightforward manner, we have the classic superhero protagonist, the evil super intelligent scientist, and the secret identity at home struggling to keep it all together. The dialogue is well played out but the thought bubble device is probably a little overused. The story plays out well enough in itself and the art is essential to this. The twist at the end was somewhat surprising but also not unexpected but it did not take away from the book as a whole. 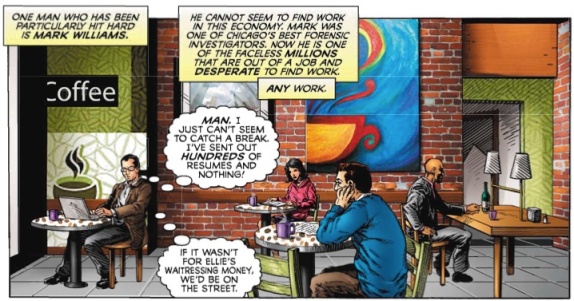 The pencilling is quite classical with a big muscly hero and crazy robot bad guys interacting with dynamic action sequences. The city is drawn wonderfully with a true appreciation for the buildings and streets, together with very realistic everyday locations such as a coffee shop and the pathology lab. The art is quite heavy in that the inking is thick but is consistent and accompanied well by the brightly coloured palette. This is perfect for a tale of gallantry set in a great city, with a well-known superhero exposition. I am extremely intrigued to see where this book will go because the story does not lie with the regular adventures but with personal trials and resolution. When illness hits, everyone is affected and it will be interesting to see how this changes personal relationships and also how this affects the everyday pursuits of the afflicted characters. The concept is novel and to have a run reach definite completion, lends to life altering decisions and permanent changes. Welcome to Joe Martino’s comic book catharsis, where the superhero world loses its innocence and us with it.