* This issue can be bought at http://www.milehighcomics.com/cgi-bin/nice.cgi?action=list&title=JUN139999 *

Back in April Noah Dorsey gave me the opportunity to preview his upcoming comic, Saint Chaos. It had wonderful art from the Hungarian Zsombor Huszka and exceptional colouring. But my initial thoughts were focused on the crazy concepts Noah was developing. The unfathomable idea that a cat can kill herself develops into the concept of a man so depressed that he wishes to end his life at the hands of a crazed serial killer. The sheer brilliance of this is when Simon Monroe is given four days to live and it transforms him completely. You may ask how does a regular man end up at the mercy of a murderer? Well the answer lies in another fantastically disturbing mythos, that when you place twelve white roses in the park bin adjacent to the playground, the ghost of the child that hung himself on the swings would follow you home and choke you. Simon does not die but finds himself chained and hanging in the torture parlour of a man named Honeycomb. I am only covering the first few pages of the book here and it storms along with one novel idea after another. This is why I am a fan of the vividly imaginative, if not psychopathic mind of Noah and why I am privileged to be able to review the first issue.

After Simon Monroe’s genuinely chilling meeting with Honeycomb, he sets about home wondering what he will do with his remaining four days. He encounters a young man being verbally abused by some local low intellect thugs and sets upon his road to redemption.  The world in which Simon decides to better is as dark and dangerous as you can imagine, but Honeycomb has taken away his fear of death. This leads to essentially suicidal actions for the betterment of a running child, a scarred dog, and a drug abused emaciated young lady. The book can be dialogue heavy at times with lengthy monologuing, but it is kept interesting to say the least. Otherwise the mood and tone of the comic pours from the pages and sits uneasily in our stomachs, but that is not an accolade shared alone. The stories are truly brought to life by the work of Zsombor, who is a adept at drawing terror and horror. His characters are exceptionally well shaded, in scenes of incredibly dimmed lighting or darkness. Each scene appears to have its own single colour scheme as the reds/blues/yellows are used only in conjunctions with black or white. Facial features are shown at times of expressive necessity but the colour remains the predominant feature of the page. When violence prevails, there is great attention paid to the impact and the splattering of bodily fluid. It is not so much life that Zsombor breathes into the page but the ethereal nightmare, borne from the depths of Noah Dorsey’s mind. 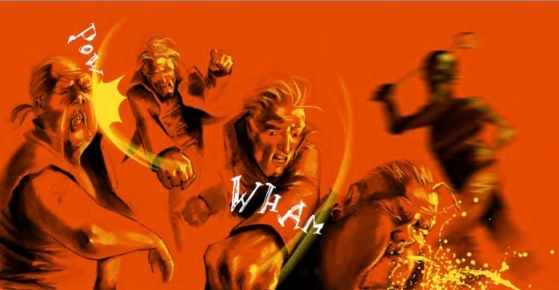 Simon Monroe is a coward.

The character is unable to develop the courage to end his life. I may say this like it is an easy thing to do, but he resorts to following an urban legend that luckily sets him on death row. Predetermination allows the Monroe to break those boundaries in his mind and develop as a person. It is expressed as an incredibly refreshing and enlightening development, and is almost the only positive aspect of the book. The adage, once we have lost everything we are free to do anything, fits perfectly here. The deeds undertaking by Simon are noteworthy and heroic as he ascends into altruism from the depths of depression. The book is conceptually stunning and Noah streamlines his hideous imagination into a coherent and believable character exposition, with Zsombor shining a murky light on a sordid and despicable underworld.

Saint Chaos is a hero.

“Oh my….slit the cornea of an infant”