Since the finale to the Avengers movie, there have been a significant number of comic pages dedicated to the resurgence of Thanos as a credible threat. Striking whilst the iron is hot is once thing, but this project requires an immense amount of build for a movie not out until summer 2015. But what this gives us is an opportunity for is Jason Aaron to write an origin story for a big bad guy. There are many ubiquitous triggers to altruism for our mainstream heroes but the villains often undergo tragic events that send them into a downward spiral, and it is this that makes for a good plot and the development of a rivalry. Thanos is no different and Jason has already proven his diversity on Wolverine & the X-Men, Hulk and particularly Thor. His ability to create on an epic Godlike scale is essential to selling Thanos as a worthy evil. He is joined by Simone Bianchi, an Italian artist know for his work on X-Men and Wolverine. His art style is quite grandiose and elegant which should suit the tone of the book. We have already seen three issues of the book where we underwent not so subtle adolescent tribulations: the bullying of a young mutant, reclusiveness spawning an inquisitive mind, a childhood attraction ultimately betrayed him, and the development a homicidal scientific method leading to matricide. As he leaves his homeworld in exploration of other species to brutally kill and study, loneliness pervaded his heart and he is left with one permanent truth: the lost love of his childhood sweetheart. Now this is where the story becomes interesting.

Jason Aaron has taken his time with this book and each issue covers a different age of Thanos. Whilst each book may not necessarily be exceptional, the overall character arc certainly is. He has taken the personality traits of persecution, inquisition and violence and moulded Thanos into the ultimate tyrant that he is destined to become. The process is incredibly successful as Aaron allows the story to grow at its own pace. His writing is smooth and clean without over emphasis or over exposition, allowing Bianchi to display Thanos’ plight freely. The images of a withdrawn protagonist, whose emotions are flat portrays a wonderful juxtaposition to the child like lability seen in the earlier issues. I have often described Bianchi’s art as murky because of the heavy inking and darkly shaded colouring, but it is vastly improved with Pieruccini and Svorcina on board. The characters are lighter and brighter, but are still able to convey heavy mental vicissitude and calamity. Particular in this issue, we are served horribly rotting corpses and skeletons to ruminate upon. Providing incredibly imagery to the horrific mental disturbance of Thanos’ mind, and his descent into psychopathy. The creative pairing are performing in thematic synchronicity.

This particular issue focuses on the quintessential themes of Thanos’ hysteria: betrayal, loneliness and forgiveness. The initial scenes play out such harrowing imagery that it leaves the reader nauseated. After razing another planet, a lone survivor confronts our resident masochist and asks why as he murdered his people. Thanos replies because of love and that he suffers because she requests it. He tells the man to go to his ship and ask his partner if he has killed enough people, worthy of her love. Our terrified alien enters the bedroom and only sees a skeletal husk of a long dead woman. “She said nothing” he says, “Then it is not enough” and through his murder completes yet another genocide. Thanos is haunted by the girl who rejects his love, the girl he would have done anything for, just to lie by her side. It is a tragedy of epically disturbing proportions, as a tear wells in our eye for a man completely at the mercy of his own insanity. It would be hard to believe that this delusion continues to torment us as the issue progresses, but it does. The imagery created by Aaron, is perfectly expressed by Bianchi and this penultimate issue builds on the firmly cracked foundations of Thanos’ character. If only he would realise what we already know: his salvation will never come, only pain and desperation. Aaron and Bianchi are about to complete an epic exposé on a villain, so tortured and damaged that they allow us to feel pity for a genocidal megalomaniac. 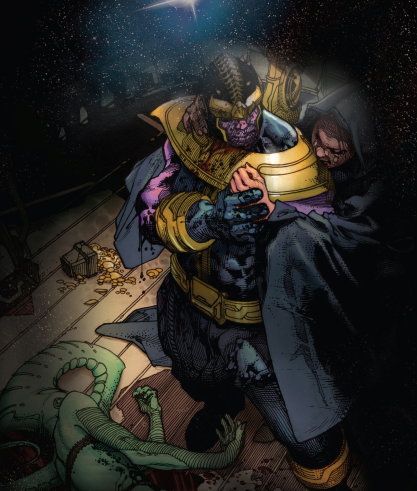 “What’s the matter my love. Am I not more beautiful than ever?”