You should count yourselves lucky that I got all the nostalgia and sentiment out of my system in my one year retrospective. I can now fully focus on the epic issue that led to the devastating final arc of No Man’s Land! This was an enormous story that ran through the whole of 1999, encompassing all Bat titles. An earthquake hit Gotham and caused widespread destruction but instead of a mass pouring of aid, the government decided to abandon our beloved city. The bridges are destroyed and people are forbidden to enter the island, declaring it a No Man’s Land. I am sure many of you can imagine the responses from the good and bad of Gotham: the people will not abandon their home, the criminals run roughshod leaving the remaining GCPD officers to maintain some semblance of control. The city becomes organised into territories with either GCPD, a villain, or Bat affiliates in charge. Bruce left the city in an attempt to raise charitable funds to reinstate his home city, but did not make a return for months. The series spans eighty issues and a large creative team, working on innovating and imaginative series of stories. We join this issue after Montoya and Gordon cleverly escape a court trial with Two-Face, and Jim is reunited with his family and finally with Bruce.

Their reconciliation is far from a happy one because Jim has fought a hard battle, in Batman’s absence and crossed lines he would never have even contemplated. Desperate times called for desperate measures and Gotham has never been more desperate. The one time Jim Gordon needed Batman; he was left alone and abandoned. Anger and resentment do not begin to describe the feelings Gordon has for Bruce. Those emotions were communicated by Greg Rucka, in the fledgling phase of his mainstream writing career. His writing is so emotive and precise that you would think he was a seasoned superhero writer. The entire comic takes place in Gordon’s garden and for the first few pages, there are no words. Rick Burchett paints a truly incredible image that is rarely seen in Batman folklore: a shamed Bruce looked down upon by Jim. The uncomfortable silence is perpetrated by a man who cannot even face his once trusted guardian, and a superhero who stands motionless with his head looking down. The shading from a makeshift oilcan fire gives depth and profoundness to the tense atmosphere. Greg’s talent is so impressive that despite the history between these men, their first words to each other are simple small talk: Batman comments on his garden. The torment on Gordon’s face is contrasted by the unrelenting mask covered visage of the Bat.

Their conversation is well paced and as Gordon asks Bruce if they were ever really friends, followed by an outburst of brutal honesty about respect. Jim has lost his trust in the Bat symbol and as his world has crumbled around him in more ways than one. Rucka focuses on the vulnerability and self doubt of Gordon perfectly, to the point where Batman has to try and console him. This is a part of Batman’s personality we rarely see and Rucka leaves us as uncomfortable as Bruce is, whilst we read it. Burchett uses the lighting, subtle mask wrinkles and ever so slight tilts to Batman’s head to portray his sorrow through an emotionless veil. As Jim’s protestations come to an end he voices his disdain at Batman’s most iconic character trait, leaving without saying goodbye.

Greg then allows Bruce to respond with classic platitudes to appease Gordon. Though they are genuine, through the guise of a stern mask they come across as shallow and hollow. Rucka then takes this friendship in a direction that surprised us all; Bruce unveils himself. It was the only course of action that would physically show his sorrow and simultaneously act as a gesture of trust. This scene completely astonished me and the artwork with such beautiful colouring was so impressive. The images were so grandiose and revealing, that I do not think anyone expected the following page. Jim Gordon refuses to look at him and in that one moment, makes Bruce feel incredibly small.

It reminds me of Batman Year One where the brilliance of the book lies, not with Batman’s tale but with the personal struggles of Gordon. Jim is as important to Gotham as Batman is, and this issue was the first time and possibly the only time I have ever seen that particular balance addressed. Jim not only rejects the gift of peace but also throws it back in his, now expressive, face. The symbol of the Bat is essential to Bruce’s mission and his concealing his identity allows it to become more than just a sign. But to Jim Gordon, who knows he is simply a talented and noble man, his identity is insignificant. In asking Bruce to put his mask back on, Gordon shows appreciation for it’s importance and highlights how much he respects the symbol but also how that revelation is too big an act of forgiveness. Maybe Jim wants to believe again that the Bat is more than just a man, and the intention is enough for recompense. As upset and angry as Jim was, all he needed was to time to vent his emotions and a simple request for help.

When I was younger I found this scenes incredible and it was my favourite part of the whole NML story. As a more informed adult I still feel the same, but it has given me further appreciation of the brilliance of Greg Rucka, in having a single comic book focusing around one conversation. Burchett complements superbly with his non-verbal communication cues and the incredible unmasking double page spread. The friendship between Batman and Jim Gordon is so precious and important but I feel it is often underplayed. As I finish my second centennial review, I leave you with the greatest gift Batman gives to Gordon, a simple goodbye. 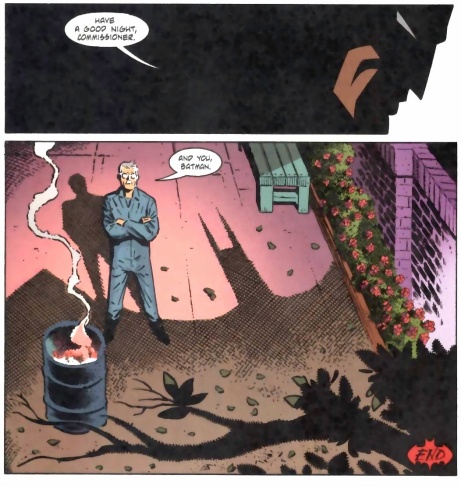