Given that I only really pick up Batman, Batman and Robin and Incorporated, I have yet to fully realise the ranking of the second tier Batbooks. Clearly Snyder and Capullo’s comic is promoted as the main book but Morrison’s Incorporated is well up there, especially with the recent impact it has had. However Tomasi and Gleason have been subtly putting in the hours to give a realistic and comprehensive response to the death of Damien. They are the creators that are trying very hard to provide solace for Bruce and the readers, allowing us to mourn for our not so favourite little boy. It is a necessary grieving process as Incorporated has already moved onto cloning Robin and Batman has entered zero year. Tomasi and Gleason are a well-honed creative duo who have over two years worth of experience together on the excellent Green Lantern Corps. I wonder whether they receive the respect they deserve for developing a whole book essentially devoted to the relationship between father and son. Now it is a book wholly dedicated to the grieving family and friends of Batman, helping Bruce to reconcile his immeasurable loss. 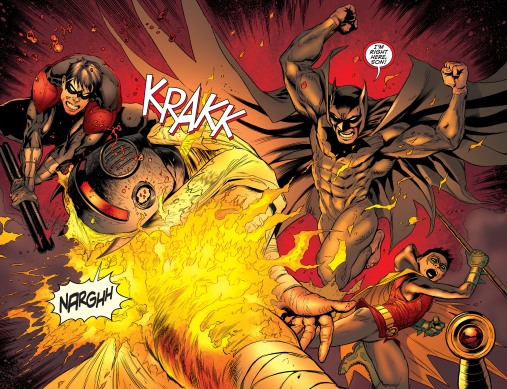 The issue shows Batman physically reliving the events leading to Damien’s death, trying to change the disastrous outcome. In his refusal to accept Robin’s mortality he has created a virtual reality programme to torture himself further. It is a process that every single one of us has undergone at one point or another, when we regret an action undertaken. It is incredible hard to stop these repentant thoughts and Dick refuses to even try to stop Bruce in this way, instead he joins him in the virtual world. This is where the book starts to recreate the events of Batman incorporated #8, with faithful re-enactments of specific blow by blow panels. Damien, Dick and Batman’s fight sequences appear as a montage of shattered panels. The action splash pages are dynamic, impactful and induce fear and anxiety of the inevitable. It is rare that you visualise a fight sequence in a comic and know that the outcome is devastating. I appreciate how the colour palette in these sequences honours that of the original comic. Patrick Gleason’s faces often have emphatic and hard features and suit the grimaces and roars of battle. With delicate touches of shading and softening of the eyes, we are able to see the pain and sadness that lies hidden beneath. It’s a remarkable artistic dichotomy at play and plaudits go to our exceptional artist.

Peter Tomasi understands his characters and is able to portray realistic dialogue with apt responses. It is essential to the book that the writing does not dominate the page, in order for the artist to express the emotional vicissitude. This is demonstrated wonderfully once the simulation ends and the participants depart; Alfred enters his own memories. Tomasi pitches his monologue so poignantly and emotionally as we watch him talk to Damien, who has been sedated preventing him from leaving the cave. Gleason brings out the warmth of the humble butler even though the shading is dark and overcast. In Alfred’s recurring memory, our creators afford him one beautiful yet tragic final embrace.

At the end of the comic we are left with one hard unpalatable truth: Bruce was never in a position to save his son, but both Dick and Alfred might have been. As much as he repeatedly relives his torture, he eventually will realise that he did all he could. However he has failed to recognise the grief and suffering of the rest of his family. A family who also cared for Damien as much as Bruce, and who despair at the decisions they made. This is what the whole book is focused upon and why each title involved a different family member. Damien’s loss does not just belong to Bruce, it affects them all and the typical insular martyrdom that he employs to deal with loss simply will not do. In using the VR machine we are not only able to witness Dick saving Robin but also Alfred talking to a loved one he let down. It is painfully upsetting to read but serves as the first step of catharsis for Bruce and Alfred. Tomasi and Gleason form a perfect book in tone and emotion, befitting of the father and the little boy we have all lost.

“This calling in the cavalry routine is getting old, Alfred”