Matt Fraction has written a variety of exceptionally high quality comics this year. Its an impressive feat considering how he moves from the loveable kids of FF to the sultry exploits of Sex Criminals. This book is from the darker corners of his imagination and takes on the lustful undercurrents of sixties television studios. It is a niche that interests Fraction because of the persistent serial nature of television in that age. The show must go on come what may, whether we lose a camera, drop lighting or the star of the show dies. This is the premise of the comic, with the additional revelation of a sordid secret. Oh and welcome to sixties New York:

Matt Fraction once described to me the feeling that would overcome you when you find out your father’s darkest secrets. The fall from grace together with the unveiling of his lustful tendencies is very difficult to rationalise, especially when that person is deceased. There are no answers or explanations and everything you knew is lost forever. This is the problem faced by TV engineer Michael White, who is trying extremely hard to not lie at the bottom of a bottle. There is a nagging voice telling him to investigate the women, who are the basis of his father’s indiscretions, because his death was untimely and suspicious. We begin by stepping through the door to a dark room, but we follow him further into a space completely devoid of light.

Howard Chaykin is a well-established comic creator and has an extensive bibliography. In recent times he was drawn Wolverine and managed to capture his torment and sinful nature. A particular highlight of his work was the Avengers 1959 series, which seems to be the perfect era for his style. If you combine these two attributes you can envisage why he is the perfect artist for this book. If you peruse his back catalogue you will notice certain distinctive hallmarks: square jawed male protagonists, raspy facial detailing, curly cowlick hairstyles and exaggerated pouts from his ladies. His artwork is not appealing to all readers but it has a very unique place in comic lore and Fraction affords him the opportunity to draw at his best. His ability to draw erotic and sexy women is only enhanced by the intricacy of the lingerie they are wearing.

Satellite Sam began as a complex story full of intensity and intrigue, as we try to understand the inner workings of the studios. It was an incredible start as the anticipation of how a show can go on without its lead, was very intense. There is a rather large cast, which is somewhat unnecessary and confusing, especially when the next few issues feature a couple of essential characters. Aside from the studio terminology the writing is precise and clear, with the motives and influences of the characters are well represented. The pages can appear a little clustered at times, especially with a heavy narrative because the pencilling is exceptionally detailed. At times the pages can be difficult to follow. However Chaykin uses a repetitive panel effect to convey emotional angst and despair poignantly. That moment when you know you have done wrong, the person with you knows you have done wrong and there is nothing you can say to each other. The characters just stare at each other and the tension is thick and heavy. It brings about a wonderful sense of time passage and discomfort. 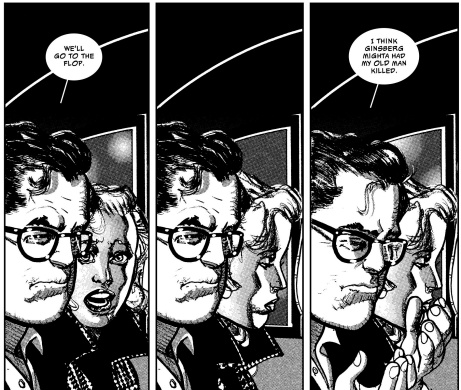 This book is seedy and dirty. Chaykin has a visceral style all of his own and brings out the immorality and dishonesty like no other artist can. As the issues come and go, we are left with an uneasy disquiet as the characters head further down in our estimations. This is the first issue to portray fellatio, not once but three times and it complements the murkiness of the dark and dirty themes. This book can be an uncomfortable read and shocking at times, but it conveys these difficult feelings and emotions superbly. The environment in which it is set is unknown to many of us, but we have rapidly acclimatised with it to the point where we can appreciate the pressures and plight of the characters. Even the central protagonist has his flaws and they are put out there without forgiveness. I am incredibly inquisitive to the ending of this book because no matter the reveals, my pity and sadness for Michael is unlikely to resolve.  I just hope for his sake, he finds what he is looking for, and not more heartbreak and disappointment. You will not read another book like this, and after this, you may not want to, but the sheer intensity and atmosphere of this book is just incredible.