I recently met Geof Darrow at Leeds Thought Bubble and posed the question,“When you pitched #2 to Dark Horse, how did they react?” He responded emphatically, “I couldn’t give a f*** what they said”. Here is clearly a man that has his own objectives and no one is stopping him in achieving them. There was no compromise or doubting his artistic integrity. The sheer audacity of this book is inspirational as it defies classic comic storytelling. Issue two was a existed without dialogue only made up of panels like this:

It was an incredible feat because as you turned each page, you saw the Cowboy manoeuver his double chainsaw staff from one position to another. It was almost mesmerising as you see him contort himself whilst swinging his weapon slashing zombies. This fluidity and coherence of motion is counterbalanced by blood splattering and flailing dismembered limbs. The Shaolin Cowboy represents the only semblance of purity or goodness in a scene of death and decay. The zombies are already deceased and their mutilation brings about scavenging insects, amongst a landscape of rotting tissue and crushed aluminium cans. The inking is very thin allowing for incredible detail amongst the appearance of zombie skin and the cowboy’s clothing. I adore the chainsaw detailing and the intricate blood droplets, contributing to a fantastic depiction of horror. It is a very interesting scene because our protagonist is facing overwhelming odds of the evilest intent, with no signs of it letting up.

The continual flurry of zombies in consecutive panels sparks thoughts of futility and inevitable capitulation. This is the excellent effect created by having a whole issue and a half dedicated to the confrontation. Eventually we reach the moment where the chainsaws run out of petrol, our fears become realised. The panel flow is wonderful on this page because we see the petrol gauge hits empty, and the chains come to a halt with few droplets of spraying blood. The page shows the whole scene from different perspectives as we seen up close the weapon and its waning effect on the incoming zombies, and then the reaction of the cowboy in close detail. There is no loss of definition as the cowboy is bruised and beaten and the surroundings remain as dirty and cluttered as ever. There is even a tortoise walking around for good measure. The symmetrical nature of the chainsaws is perfectly in balance with the nature of the scene and the cowboy looking left and right. It’s a brilliant page, especially considering it comes after pages and pages of fight scenes. 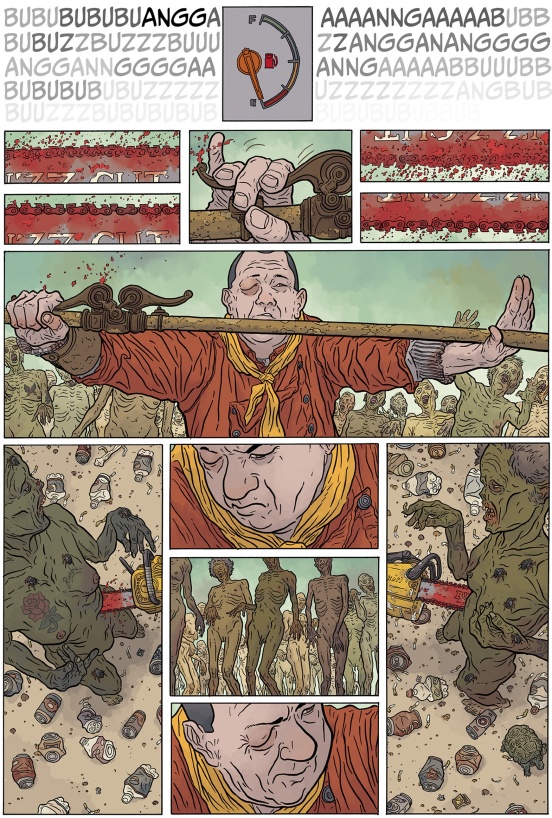 As the Cowboy makes his escape he is left exhausting and gasping for breath. The final two panels of the comic leave us bereft of hope as our hero looks devastated. The angle of the panel is superbly poised showing the heavy head mustering the energy to pose and continue the fight. It is a panel of desperation and exasperation. The speech bubbles represent the rapid shallow breathing and the detailed sweat droplets combine to give the above effects. It leaves us excited but nervous at his plight, but eager for the final issue of the run. 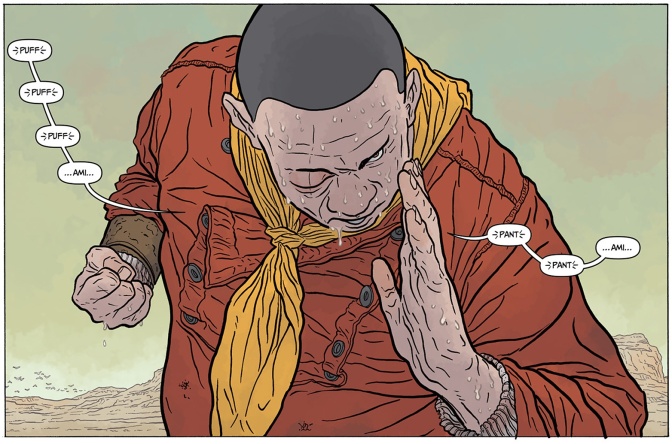 The combination of detailed art, repetitive fight scenes and fantastic panelling transitions are wonderful tools used by Geof Darrow to bring about a fantastic comic. It takes a classic zombie tome but depicts the futility of battling them more exceptionally than previously. Fantastic art from a rebellious and innovative creator.