With the miserableness of the new 52 and multitude of dross ideas coming from DC, we find ourselves being flooded with books about Batman. This is not just because he is almost everyone’s favourite hero, but because his main book has been exceptionally well received and deservedly so. Batman is the one shining light of Gotham but also the DC universe, hence the reason why they are going to ride that Bat cash cow for as long as they can. I speak as if this is a novel idea but it has always been the case, but in recent times as other comic companies have rushed past them, and they need to return to their star player. This is not a post about the inner machinations of DC but about art, which is what the industry should be focusing upon. When you play to a mainstream crowd, there is a focus on steadily building a story or redoing a well-versed origin of hero they know. The character traits, the motivations and the actions need to feel like the classic interpretation otherwise people will not buy into it. Of all the Bat books out there, a single Bruce Wayne ideology pervades throughout, it may be dull and repetitive but it is a well-proven formula. Batman Black and White is relatively under the radar and truly affords creators a platform to be singular and leftfield. There are five stories in issue six and so how much character defamation can you really manage? Well I would not be writing this post if there wasn’t something to talk about. Defamation is a particularly harsh word but three of these stories looked at Batman is a different light, and potentially an all too realistic one. 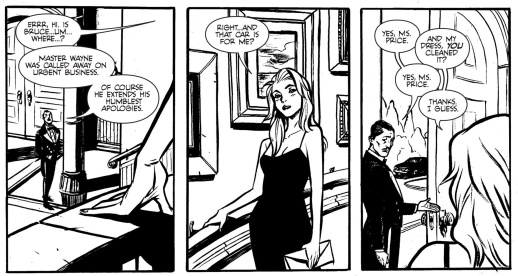 This story is told from the viewpoint of the women he beds and the pain he causes. Ms Price wakes under Bruce’s sheets and is gently escorted out of the Wayne mansion with a clean dress to her walk of shame. She tells her friends of the night they spent together and how when the media spotlight was off them, Bruce retracted into a shell, like he was not really there. The façade of the billionaire playboy is always a spiteful one and the ladies involved may be willingly part of the parade, but it does not mean it is not hurtful. Ms Price may have realised what she was letting herself in for, but that does not make her disappointment any less. This is wonderfully drawn by Olly Moss, as the sadness and despondency is clear throughout. However Cloonan plays a devilish plot twist where she directs the final pages through sex and violence. Whilst we see images of Bruce being not so intimate with Ms Price, they are interspersed with images of Batman inflicting violence on criminals. Whilst superficially it may portray Bruce’s central thoughts, upon deeper inspection it subtly indicates that he may a sadist and that basic coitus is not arousing enough for him. The images are juxtaposed so crazily that it becomes quite disturbing, but fantastic in telling the story. The final words ring through in so many different ways depending on how you decide to take them. Fantastic work on many a level.

“He’s going to really hurt someone”

She Lies At Midnite by Adam Hughes

The next tale is brought by one of my favourite artists who draws women like no other. Catwoman begins in a hospital bed heavily injured and paralysed, and Bruce is beset with sadness and remorse. He then seeks revenge and cripples two rival gang factions without hesitation. The thought boxes depict how he revels in hurting these people and how upset he is because they injured someone close to him. He then meets Slam, an intimate acquaintance of Selina’s who reveals to Bruce that she is not injured, let alone paralysed. Catwoman has manipulated Batman in order to maim the men that actually injured a young immigrant girl. You can imagine Bruce’s anger and all too real threats of violence upon Ms Kyle. She plays her cutesy innocent card, which gets her further than you would expect. She berates him for only paying attention to the bigger crimes and how he would have ignored her requests for help, hence her subterfuge. This is a very interesting story, as not only does it highlight the joy Batman receives from violence but his outrage at being played for a fool. I often find the depiction of our caped crusader as a violent man a little upsetting, but that is only because he is. His vow of not killing may make him a little more moral but him revelling in sadist acts, such as crippling, is far from honourable. I enjoyed Selina’s ruse because not only did the super detective Batman not spot it, but because his sentimentality was abused knowingly for a greater good. Nobody defies the Batman and only Selina has the gall to do it so well and fail to batter an eyelid in doing so. His anger is justified, maybe not at the level that Adam Hughes directed, but it serves to bring him down a notch or two and for that I am impressed.

“Can we stop for ice-cream on the way to the station?”

To Beat the Batman by Dave Johnson 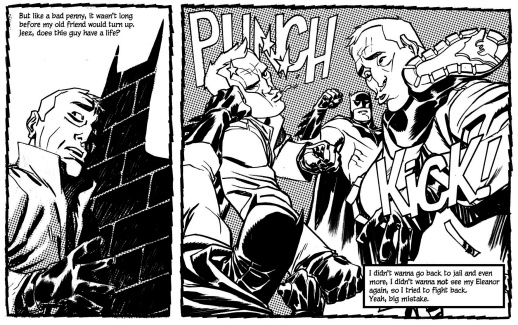 Our final story is the most troubling of all and comes to us from the incredible artist of 100 Bullets, Spaceman, Punisher and Deadpool. Criminals are all wretched and malicious right? This is what most mainstream books play their goons as, but Johnson takes the perspective of a wrongdoer who has just taken as much as he can take. We do not know his name but his story is painful and tragedy stricken. He is written from a sympathetic perspective as a man who made mistakes for a woman he loved, and each time he was blinded to the reality of her shallowness whilst being pummelled by the Bat. He started with small crimes, some petty theft, robbery and even a heist but ultimately ended up in one of the worst places of all, as a Joker henchman. As he runs away from the disastrous situation he shoots a policeman without thinking, knowing that all that had gone on before was nothing compared to this. His punishment was going to be severe and his life has been ruined. He wasn’t even talking about the justice system; he was referring to Batman imminently knocking down his door and readying his fists. Our unknown antagonist sits there and waits. He cannot take it anymore and whilst revealing to us that he is a coward, he slits his wrists. In his eyes he is victorious because he cannot be broken again by Bruce, he has taken that away from him. 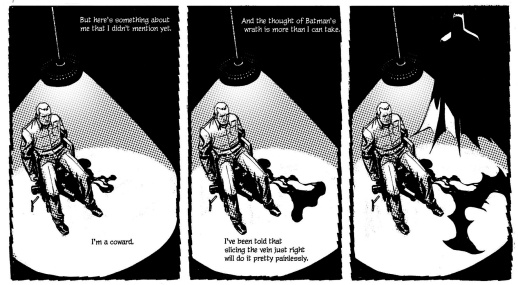 This is a remarkable story of a man who made the wrong decisions. They were initiated from misplaced love but served to take him down a road that only left disappointment and punishment. This helpless gentleman was not a bad person but Johnson depicts him as a man that did very bad things. He did deserve the punishment he received from Batman, and in ending his life, he didn’t beat the Bat, he only found an escape from himself. If he had asked for help then he would have received it, and the first person that would have given it would have been Bruce. I can only imagine that he would have been devastated at reading his suicide note. It may even reflect on whether Batman gave our villain a chance to reform or say his piece, but it is unlikely. As the man said, he was a coward and Bruce could never have saved him. Such poignant and devastating work.

“I guess you could say I finally beat the Batman”

There is a lot to think about with these stories and I have deliberated over them for a little while. Batman Black and White is an excellent platform to allow creators to delve into the psyche of the Bat, and as they have shown, it is a scary place to be.