I initially took issue with this comic because, straight off the bat, Magneto was murdering people. There were few qualms and his initial kill may have been an aberrant sentinel, but his subsequent targets have not been. Magneto has been an X-Man for a number of years now, long since Genosha was destroyed by sentinels. It was an interesting change of tact and many of us suspected he was maintaining a subterfuge. He has taken Scott under his wing and they lead a covert X-Men stable interesting in protecting and educating new mutants. Bendis has cast aspersions on his motives way back in the early days of Uncanny X-Men but this has not come to fruition. Cullen Bunn enters the X-arena and immediately sets his stall out on the personality of Erik Lehnsherr. Magneto has returned to his single-minded dedication to mutant salvation at the cost of the lesser human species. It is a brave direction and somewhat out of continuity, but there is clearly a story he wishes to convey. Time will tell whether it follows a Marvel Universe drive, but that does not mean the solo title cannot be a coherent and cohesive body of work. And in that respect, it certainly is holding water easily. 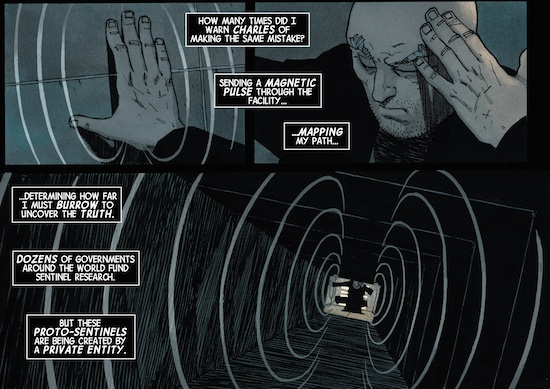 Cullen Bunn has developed a reputation as a diverse writer who can turn his pen to a variety of styles and characters. He has recently started working on solo villain books, which includes Sinestro for DC comics. Magneto is a book that comes straight to the point, with no airs and graces and this is reflected with the internal monologue narrative. The initial comics depict Erik discovering a collective developing a new form of human-sentinel hybrid. This particular issue directs him to a facility that is creating them and something altogether more sinister. He confronts the project leader who reveals the intentions of the facility and their underlying motivations. Dr Alain is far from the mutant hating scientist of many an old genocidal faction, but is uniquely driven by self-preservation. Her wishes are live in exile from mutants, finding peace in isolation. The sentinels act as defence mechanisms instead of mutant hunters. It is here that Bunn explores a deviously unsettling juxtaposition: Magneto once created the exact same thing and in Genosha, had created a mutant city under his protection. Unfortunately that met with disastrous consequences as it was brutally destroyed by sentinels. Ironically Dr Alain is using the prototype machinery that was used in that very attack to create her own defence militia: The Master Mold.

The comic is fantastic in addressing Magneto’s own miserable past and his inability to find solace in repentance. There is a solemn undertone to his narrative, and his original sin is the rationale for his immoral and abhorrent behaviour. There are some incredible flashback sequences that depict the demise of Genosha and Magneto exploring the remnants of what he once built. Gabriel Hernandez Walta’s art is as unforgiving as the writing because it is dark, thick and heavy. It is not the most aesthetic of comics, but its sense of dread is perfectly in keeping with the tone of the book. Magneto appears dishevelled and devoid of sleep, with an unshaven stubbly appearance. He is almost unemotional throughout and barely changes expression, wearing the permanent degree of remorse on his person. His powers are well controlled as Walta uses inventive ways of manipulating magnetic waves, including using it as an EMP device and manipulating a paperclip into a devastating weapon. The characters are almost muted in their drabness, as we see blacks and grays throughout, in fact Magneto seems a pale faced old man. Jordie Bellaire has captured that misery perfectly without plunging the comic into darkness. If you take the underlying premise, the inconsolableness of its central character and the actions undertaken, then you can appreciate the dour nature of this book.

The story is a fascinating tale featuring rival factions having to face the consequences of their actions. Magneto visualised the repercussions of his mutant campaign and the casualties of its parade. Within this comic, some humans may have accepted homosuperior as their natural ascendants but the war is far from over. Magneto is resigned to the fact that death is the only option to prevent the threat from ascending. Bunn approaches Magneto in a very post war manner with a critical exception, he kills because he has no hope for redemption and the blood will not wash from his hands. This was apparently the rationale for joining the X-Men: the hope for absolution by his fellow mutants. He appears to have given up on this aspiration, which is why it is not entirely in keeping with current X-happenings. Clearly the X-Men would not allow him to continue his crusade. Erik’s actions are not a simple return to base and his continuing reflections do bear out some personal growth. He is no longer the headstrong brash mutant he once was as he has become tactically astute. He is using strategic manipulation to achieve his goals as opposed to the brandishing of untempered power. His anger and resentment are more controlled as he maintains a remorseful stoicism of days gone by. It is very difficult to tell whether he actually regrets his actions at all, or that he is depressed at the inevitability of death. I have little doubt that the road he is on only leads to depravity and damnation but I will continue enjoy Bunn and Walta’s depiction of Magneto’s journey into purgatory.