There are times when this book feels like it was written just for you, the troubled adolescent years, the experiments in sexuality, the dabbling of mood altering drugs but sometimes it removes itself altogether from anything we could’ve possibly have gone through. But the fundamental concepts of the book remain firmly grasped onto no matter what is thrown at us or even at the children in this book. No matter who we are, no matter who we even think we are, these feelings are transient and time will pass through the hardest day. Even if that day means killing the bastard you once shared a cell with. 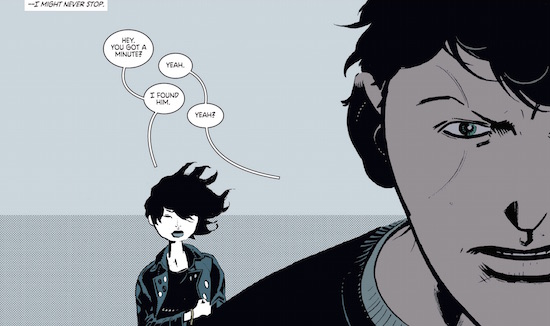 The story of Deadly Class has been one of nervous exploration as Marcus moves from a secretive and ignominious past. Recent issues have explored what can only be described as a normal adolescent behaviour, given the circumstances of these teens being at a school training them in assassination. As Marcus forms a literally deadly relationship with Maria, the true love of his miserable life is Saya. This predicament has all the tumultuous repercussions expected with the melodrama of youth. However these characters arrived at these positions, whatever their circumstances were, times are going to change as Marcus can no longer live in secrecy. As nauseating and upsetting some of these issues have been, they were only there to prepare you for the incredible depravity and debasement of Marcus’ youth. Remender excels in character exposition and mood conveyance, as Marcus is a tragedy personified. It is one thing to be able to fully explore a character but it is another to garner some hope in the development of friendships and relationships. Their exploits and adventures help to build these rapports, where once Marcus was reserved and quiet he has arisen to almost lead the group. Couple the craziness of hedonistic drug abuse, the all too reality of murder, all expressed with succinct and almost muted teenage dialogue and you cannot credit enough the abilities of Rick Remender.

As Saya reads through Marcus’ diary about his time in a children’s sweatshop factory, we see startling images narrated by a very determined but subjugated young man. It is a painful read because the true emotion almost jumps off the page as Craig draws incredibly poignant images of gnarly abusive guards, needle swallowing, physical emaciation, unsympathetic browbeating and sheer desperation. The range of emotion on display is almost too much to absorb and process because it is so jarring on almost a physical level. The terror of the factory is so intense that you feel the complete evisceration of hope from these poor young children. The guards are so repulsive and the lead of the organisation is a hideous old lady. Craig’s art is quite raspy in nature as the feelings you develop from seeing the way in which he draws eyes and teeth, makes you shudder. There are times where the panels are so dark that the shadows only allow the prominence of the characters smile and the gaze of their eyes, often in a terrifying way. The are some phenomenally well placed and staged backdrops throughout these flashback sequences, including pictures of a crucified Jesus, the mother Mary and even Ronald Regan. The use of religious iconography to present moral superiority in the environment of a sweatshop is very poignant. 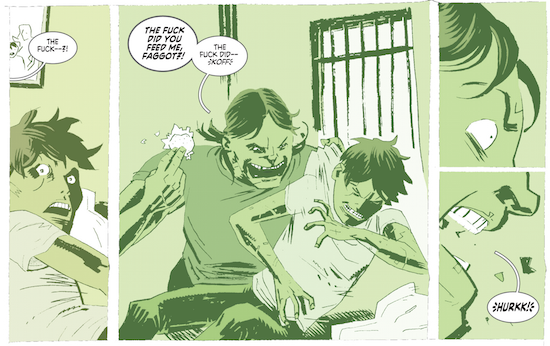 Loughridge’s colouring is the most essential feature of this comic in transitioning the reader from the flashback sequences back to the present. The slightly brightened primary colours contrast starkly with the muted shades the comic normally resides in. The primary colours used represent different parts of the flashback to give it context and separation. But it also brings an illusionary quality to it, Id like to say ethereal but it is so much more of a nightmare you want to escape from. And then it happens, the firmer, darker inking that provides such a radical change that it gives you time to breathe and settle yourself again.

As equal the devastation of Marcus’ predicament, is the fightback to escape it. His plan is quite clever and the way in which he sets alarms in standing up to his cellmate is impressive. His violent actions in surviving this campaign explain his personality at present and the willingness to cross that proverbial line in the sand. We are pleased to see him gain vengeance on his oppressors but we are equally anguished to see the steps he must take in order to do it. These scenes represent the crux of the whole book as Remender has shown us Marcus as he is now and how he came to be there, in an attempt to work out where he is to go next. The story is about to come full circle but this time he is not alone, he has people that care for him, that are willing to fight for him. The book would have you believe that only violence may ensue, but I for one have hope. In a comic that cannot be described with the word, I maintain that this is what it aims to achieve. The cruelty of having such young people deal with circumstances no adult should deal with, is simply unfair. I want there to be some escape for Marcus, I want him to be with Saya, I want him to have a better life. For the world he has lived in, he deserves it and Remender has allowed him to grow and become stronger as a man. This issue has seen him do something he has yet to ever experience, to trust in someone. It is heartbreakingly tragic to see youth that never saw a glimpse of innocence. As much as we resonate with the life he is now beginning to create for himself, we can never truly appreciate where he has come from. Incredibly in building a plot so full of agony, Remender has introduced a degree of normality and allowed the cast to grow together. However as we mature into adults taking on board our times as confused teenagers, few of us have ever had a hurdle as big as Chester Wilson to overcome. The story is calling for a resolution and the nervous anticipation builds as the issues go by. As I read this issue over and over again, I am reminded of a saying that helps in times of need: and this too shall pass. Though I doubt very much, that at this time, Marcus will find any solace in that.

“Lost the capacity to cry. Think if I started again now, I might never stop”