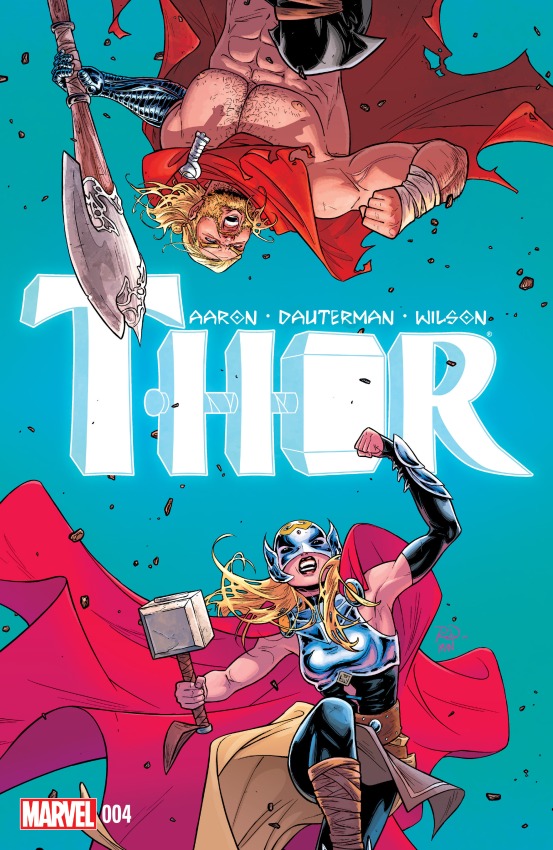 Yes that is right, it is another one of Dauterman’s delightful covers of the week! These pages are not just amazing pieces of art but quite clever aspects of design, such as the Thor under ice cover of issue three. This one is no exception as the page does not just refer to the events of the comic but plays a lovely juxtaposition of both characters called Thor. Dauterman shines as he is able to draw both characters and does so majestically as they need to be shown. Ribic was all about the epic landscapes of the world around them, Dauterman is all about the dynamism and fluidity of the characters. This is exampled by how both Thor’s have such magnificent hair and their cloaks both seem to move of their own accord. The page is not just a comparison of two Thors showed in mirror-esque composition but also the viewer seems to sit below the centre point of the action. The Thors seem to be running towards one another and we see them lean in readying a punch to their opposite number. Their appearances are quite intriguing as the comparison of both outfits are quite telling, because female Thor has a beautiful sheen on her chest plate and mask but male Thor is without and his clothing is ragged and unkempt. The fall of one Thor and rise of another could not be more obvious. This is where Dauterman’s designs truly astound as the new Thor looks so beautiful and regal but old Thor is rugged and hardy. I quite like how tough male Thor looks and his appeal now lies in not in being a prince but in being a pauper. Wilson’s colouring is just magnificent and essential to each character because it makes the page pop out with such vibrancy. It really complements Dauterman and sets a brighter and more lively tone to the whole book. This comic has become so very exciting and auspicious and I am so pleased there is life after Ribic.