My initial thoughts about this comic were a little sceptical because I was worried about yet another comic loosely tied to Batman, clearly as a selling point to devotees. Before I launched into a diatribe on commercialism and product obsession I actually read the book, and not to my surprise I quite enjoyed it. I say that I wasn’t surprised because ultimately no matter the reasons for a book existing, there are still hard working creators seizing their opportunities to create quality. And often they do and in this case they produce a wonderful work of art with a character so enjoyable to read.

There may be a few teenage DC comic books out there but I have never felt they were actually that realistic and more superheroes who had undergone tragedy and difficult times. The innocence had already been lost and naïveté only found in times of being overconfident and gung ho. Gotham Academy is none of those things and tells the story of Olive, a classically shy and imaginative young girl at a school where she doesn’t feel like she fits in. Thematically the book hits all the notes of a young lost schoolgirl: She has her own secrets and troubles focused around her mother, mentors a young high spirited student, is attracted to the classically tall and handsome guy, shies away from the cool kids, rebels against authority and has courage and determination and explores places she shouldn’t trying to find the truth behind myths and ghost stories. It is actually very impressive that all these plot points are covered in just six issues and Olive reaches a degree of closure for many of them. It doesn’t feel forced or false at all and her genuinely sweet and caring nature just floats off the page.

The characterisation is contributed to significantly by Karl Kerschel’s art and Msassyk/Lapointe colours. The classic Gotham landscape of dark gritty shadows is infrequently seen because the night sky is alit by the moon and seemingly brings the warmth of the sun with it. The blues and whites are so delicately in tune that Olive’s hair appears to glow in the dark. It all seems perfectly natural, even when Batman is in the picture. The panel where the ghostly representation of her mother flies from her grasp is almost supernatural but quite enchanting at the same time. Quite a lot of the comic occurs during the day and the school scenes are bright with yellows, reds and oranges. The inking is quite fine and does not constrict the colours strictly allowing the light shades to shine.

Olive’s appearance is quite striking as she has bright white hair and a rosy complexion. Whilst she is on her adventures into the tunnels at night, her bright white evening dress merges with her figure to give a beautiful and graceful look. Her expressions are so essential to her persona and her defiant and angry glances contort her whole face to bring emphasis, especially in confronting Batman. In times of sadness and remorse, she wears her heart on her sleeve and allows the reader the chance to empathise in turn. This specific issue has flashback scenes of Olive’s mother and Chen deliberately draws them more muted in colour and avoids any harsh inking, giving a watercolour effect. But she is able to bring out warmth and love out of the darkness, which is difficult to find in places such as Arkham Asylum.

Aside from the amazing look and feel of the book, there are many attributes that make this comic stand out from others of similar ilk. As expected Olive does learn the values of friendship, patience and sacrifice but in a very pertinent manner. Her experiences echo her mother’s plight and she begins to understand what she suffered with and how she would have appeared to others. This helps her to empathise with not only her mother but also, of all people, Killer Croc. The adventures she has may be unique to her but the allure of being a rebellious explorer helps to develop her friendship group. The other students involved in the mysteries of the past six issues, allow them to become closer and accepting of any outwardly idiosyncrasies. As a young girl, Olive not only matures in her experiences but remains steadfast in her principles even when tested by those of the firmest resolve i.e. Batman. 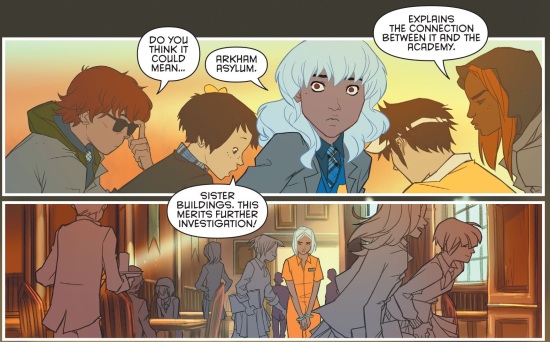 Seeing as this is a Gotham affiliated book, there is obviously some element of chicanery and villainy around and that comes in the form of Arkham Asylum and Killer Croc. This is what sets this book apart from so many others, Batman is not assumed to be the good guy. Olive sees the world through her own eyes and refuses to accept the caped crusader as the hero everyone else does, in fact early on she remarks her dislike for the Bat symbol. As she performs her own detective work and makes discoveries worthy of Bruce himself, she derives her own conclusions and has the integrity to stand by them. This is how to do a Bat-affiliated book without obviously appearing to be one because there does not seem to be any other function for Batman’s appearance, except as a plot device for the personal development of Olive. I highly commend the creators for this because it proved my cynicism wrong, but I am even more grateful for Becky Cloonan and Cameron Stewart for giving us Olive, may her good nature and determination be an inspiration to us all.