The comic is very unassuming, especially with a title that has no relevance to the first two issues insofar. It is almost too innocuous to notice on the shelves but in a world of grand empty promises and overly promotional covers, this comic actually stands out. And as soon as you start reading, the delights flow off the page, as we learn about four average kids who have yet to actually walk into a bank (Sorry if I spoilt that for you).

Before we delve into the main characters the chapter titles are homages to classic gangster movies. The first issue took a line from Goodfellas and this issue turns the original Mean Streets line, “You don’t make up for your sins in church” into “You don’t make up for your sins in school”. It is quite a lovely touch in presenting this comic as a gangster story but also because these lines are written atop of children’s wallpaper. There is even a credit for this for Courtney Menard, which is thoroughly deserved with the imagination invoked with these designs. Before the pages even become the comic, instantly the stage is set for a story of youthful delinquents. 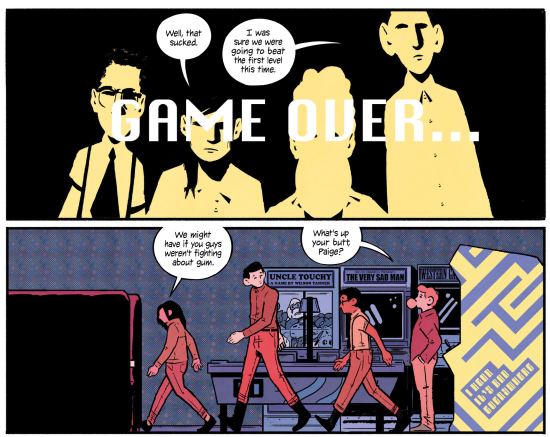 The plot is relatively simple. Four remarkably distinct friends play games together, whether it be a home made board game or an arcade machine, with their personalities shining through the characters they create. Paige is the rebellious female teenager proving she does not need her late mother by playing figures such as Sir Manly and Franky Barbarian. Berger is the selfish loudmouth who would rather use the last quarter for gum than bring the cripplingly shy Walter back to life, who no one even noticed die. And Stretch is the sensible beanpole that brings balance to the group. They spend time together, they argue together, they take on bullies together and soon enough will become gangsters together. It’s your rather average children’s story. 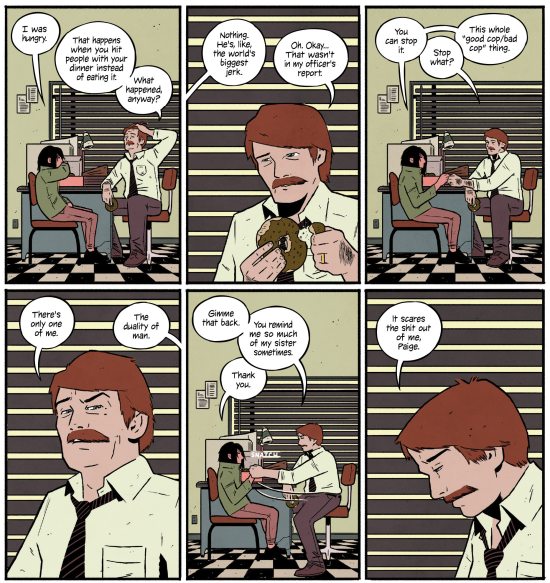 Their simple arguments breathe life into their personas and ground the book as a realistic tale of the youth trying to transition into their teenage years. It brings refreshing amusement that Paige will dare the police to lock her behind bars, or that Berger remembers a license plate because it spells the word asshole. These small touches build into a bigger and believable story where Paige is trying to understand why her father is cavorting with criminals. The audacity displayed by these early teens is impressive enough that when it comes to dealing with nefarious adults, their ingenuity puts them at a higher intellectual level. It is an entertaining story all the way through because each individual is believable in their behaviour, even when it is Berger taking a bite out of a sandwich in a house they have broken into. However the real beauty of this book is how the scripting combines with the artistic storytelling without missing a beat.

4 Kids Walk Into a Bank has a story direction akin to David Aja, paneling structures similar to Wes Craig and page layouts reminiscent of the mighty Chris Ware. That enough should conjure images of how well the story is conveyed because it is a delightful read. The repetitive boxes with identical images only subtly altered is an impressive way of pacing a conversation as well showing the reactions of it. Paige conversing with her father whilst he drives a car is simple and effective, especially considering you can only see the lower half of his face, and most of that is moustache. There is a symmetry to the nine panel pages and alternating boxes show differing aspects of the conversation building into a harmonious aesthetic. The double page spread at the centre of this comic is storytelling at its best as Paige searches the police computers whilst her uncle liaises with her father. The patterned panel structure is depicting the computer screen interspersed with the background shots of the adults approaching. It reads so simply for something so cleverly constructed. 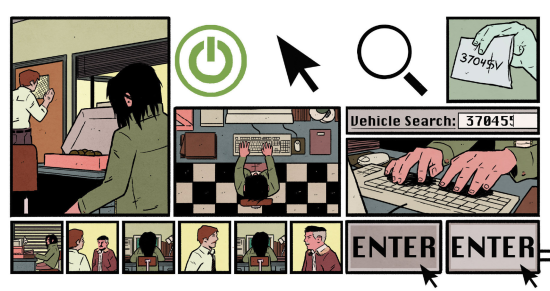 There are so many moments throughout this book to spot and smile at; including the lettering of Walter’s speech which is a smaller font size because he is so shy. This is a comic book created by students of the comic world, people who exhibit such love and innovation, yet still respecting the pioneers of graphic art. And they do it without self-aggrandisement or any fanfare at all. The simplistic title may appear banal but in actual fact it is challenging you to take a look at what is inside. One glance at the imagination that leaps from the page, and the book is finding itself on your pull list. Its postmodern approach is quite brave but built on solid foundations of fantastic storytelling. It has faith in itself and issue by issue, is proving to be one of the most unmissable comics released today. Not that it would ever tell you (okay it does mention it is exciting on the cover, but you get the gist of what I am saying).