*It is impossible to discuss the genius of this book without spoilers, a thousand apologies*

Before we discuss anything, take a moment to appreciate the storytelling involved in the dialogue emptied opening page:

The panel structure is a simple nine box construction but they sit in pairs of similar shapes. The opening top half shows the scene from out wide and to the side. Then it progresses towards Vision and encircles him until staring directly into his eyes. This is the point of the page, to take us on a journey into his mind through the contemplation of his own thoughts. The lighter, crafted from Vibranium, was a gift from Steve Rogers and echoes the life that Vision leads. The stamp reads England 1943 and it is referred to simply as a metal that lasts. It is functional, there is no change or deterioration, it just continues to light a flame. There is no wonder in it and as he continues to flick it on and off, the panel colour adjusts accordingly. The alternating light and dark brings a pace to the page but also a sense of monotony. The expression is unchanged but the subtle change in angle bears a heavy weight on those unchanging perfectly functioning eyes. The rhythm Walta & Bellaire use in conjunction with varying perspectives leaves the reader looking at a larger final panel with tentativeness. And in nine panels of the opening page, the mood is set for the comic.

Where once King used the family to understand how humans interact with one another, he now focuses on Vision trying to cope with the loss of his son. The innocence of a childhood obtained from electronic databases was difficult enough for Viv and Vin, but for it to abruptly end so tragically is something no text could ever prepare you for. In fact, Vision consults every philosophical and religious tome at his disposal and decrees that the death of Viv is simply not just. King plays with this idea throughout the issue and the adages of an eye for and eye come to mind. Vision’s solution for addressing the unjustness leads him to remind himself, as he had done since the first few issues, that he has saved the world thirty-seven times. His own need for fairness that is a hardwired thought process is tested severely and culminates with him taking leave of the house. This parallels his dog instinctively running to the door to be met by electricity; a normal routine taken away. It is not just the pet that is struggling with the change in daily life. Virginia has tortured herself since issue one with her actions and their consequences, with the mindset of a protective parent. Current events have left her unable to string together a coherent sentence, instead she recites a nursery rhyme repetitively. Viv has a more hopeful approach: God. 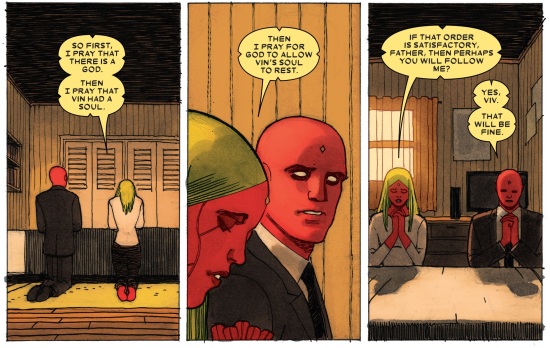 Her willingness to accept that there may be an omnipotent force is quite impressive for an android. Hope and salvation for a soul is a concept often alien to mechanical beings but King employs more of an open arms approach. Vision follows suit, perhaps with his own curiosity but more likely in performing his paternal duties. In any case it is a lovely scene that gives Walta and Bellaire a moment to reflect on the family unit. Five panels, all showing glimpses of the life they live and how it is falling apart. Quite deliberately the dark opening pages move towards a rising sun, as the golden hue permeates through the windows and provides solace, more so to the reader.

The final moments with Vision in the dark sees him remember Vin reading a line from The Merchant of Venice. As with every moment of this comic, not a piece of dialogue is wasted, and the line talks of a drunk man being less than a man at his best and little worse than a beast at his worse. What is the value of man? What is the value of life? How do you reconcile the life lived compared to a life lost? What is the value of a robot? King comes full circle with his narrative with the idea that none of these very human ideas and values apply to VIsion’s family. His wish to acclimatise to the way of life of the people around him, have forced his loved ones to accept values given to them. There is no God and there is no answer to all of his prayers, why hope when you can intervene? Vision sits in the dark, until he doesn’t.

Tom King toys with this family in a premeditated way because to treat the Visions as human is not realistic. The development of Virginia, Viv and Vin emulated the growth of Vision in his earlier days to a point where they were able to assimilate to society. They took on routines, activities and even social interactions that were completely unknown to them. But they learnt to care for one another and be there when there was a lack of understanding or difficult choices to be made. A robot still has to make impossible decisions, whether emotional influences are involved or not. The realm of philosophy exists because existential crises require complex faceted discussion not simply solved. And this is where King approaches the artificial intelligent argument differently to many writers that have gone before. Vision clearly feels and displays emotion and has always done. He is not truly a cigarette lighter and neither are his family because they are him. Ergo this is a story about a family who have grown together in a very short time, that now grieve the loss of their son and brother. King is using this superhero book to explore a very difficult and emotionally irreconcilable event in real people’s lives. And in combination with a wonderful artist and colourist, he is producing one of best treatises of coping with loss that has ever been seen in comics, under the pretense of a character who struggles to understand it all, which is no different to you or I.