Spoilers there surely shall be!

East of West is great. Oh wait…you already knew that? Of course you did, but did you know it was still great?

This current “Season Two” story arc is fourteen issues and has taken twenty months to deliver. The impetus garnered during its first season has certainly waned partly due to this reason. This is not an oddity for Image comics as the season breaks have become quite deliberate strategy to allow time for creators to complete the work, for a host of very valid reasons. I think it would be unfair to begrudge the company or individuals involved for the release schedule, and I certainly would rather the indigenous artist complete the book without a fill in. I am a patient man. In the world of reboots and crossovers where more is better, the creator owned galaxy is doing it its own way. The current DC bimonthly schedule is ridiculous and given the sheer number of Batman and Superman related books being released, it would be impossible to yearn for anymore. This flooding technique may appeal to a lot of fans but there is certainly a dilution factor as artists change and fill ins become more common. But the story is still the story and it seems, certainly from the sales figures, that it is working for DC. East of West is a book that is diametrically in opposition to this stance and delivers its book once every two months and monthly for the past five issues. Whatever your view on Image, they have respect for the intellectual product because once other external controlling demands come into play, the quality invariably decreases. I can only assume this is the reason why so many promising creator owned books have never seen the comic book shelf again. If they were owned by the bigger two companies, there would be heavy contingencies in place to keep the comic published but at least the story would go on. Some creators are very clever with this regard and produce one shots with guest artists, which has been a fruitful venture for Gillen and McKelvie for example. East of West has even created a summary comic explaining the factions involved in the world, which is definitely a helpful guide. The special edition issue with extra pages of notes and sketches is a less satisfying way of bridging that gap, but is another option. As patient as I am, there is still part of me that longs for certain titles and find that itch very difficult to scratch. There is a subset of the comic fandom that is content with this approach because it is slowly becoming a well-known fact that many readers trade wait Image books. It is genuinely difficult at times to even remember what happened in a comic a few months ago. It cannot be underestimated how financially beneficial this is to companies, so is there really a problem? Well…yes, because stories are about endings and resolutions require building momentum and tension. East of West may have deliberately slowed its second season but there were actual gaps in story much longer than that, because of how Hickman and Dragotta paced the subplots. 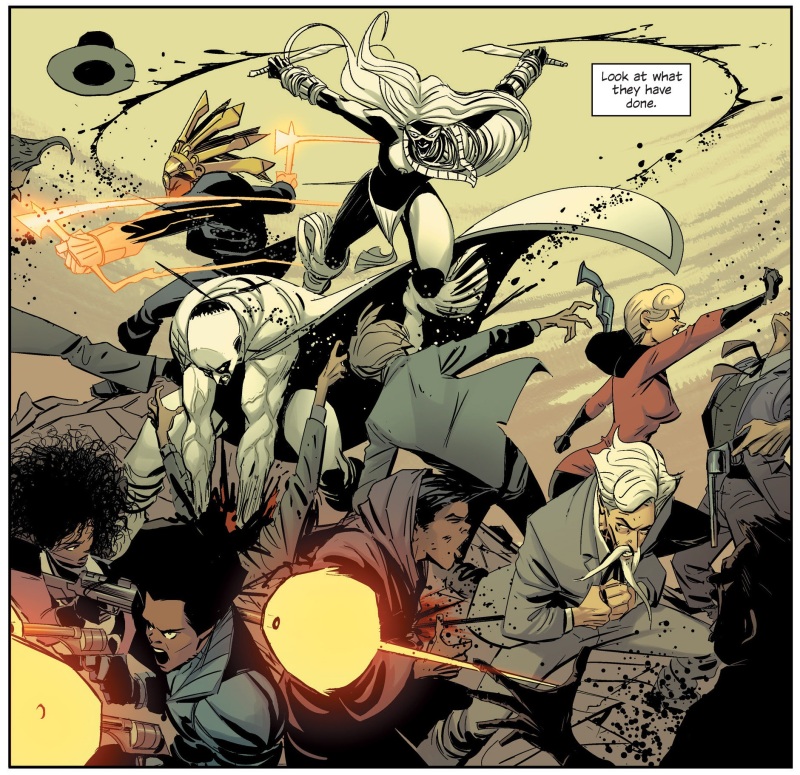 Though there is a complexity to the structure and politics of East of West, essentially it simplifies into a communion of ruling states that follow a pre-ordained doctrinal message. When that message was misconstrued and rewritten, a civil war followed. Those events were meticulously designed and culminated in the last couple of issues. Every book prior to that followed individual sovereign factions and their own personal stories, readying for a grand conclusion that eventually came. Hickman has the ability to produce a single issue that delivers an eventful conclusion, whether it is a physical confrontation, an embittered argument or an ideological change. Despite there being months between the entanglements of the Chosen delegates of New Orleans, People’s Republic, Confederacy etc satisfaction was assured. A caveat is required from readers that you accept that this aspect of the tale may not be broached again for a very long time. This pledge is almost a necessity with every Hickman title, but he is true to his word as it is rare that he fails to deliver. In fact, Dragotta produces his most exceptional work as the artist on this book and some of the scenes are incredible to behold. I once wrote a piece on how he handled a fight sequence around a bathing pool involving rebel factions within the People’s Republic. It allows and encourages time for rereading and contemplation but as thirst quenching as that may be, it only lasts a few of weeks at most. I genuinely do not think there are many better combinations of writer, artist and colourist producing as good a book as East of West. It is tonally intact and emotionally very comfortable in its execution. 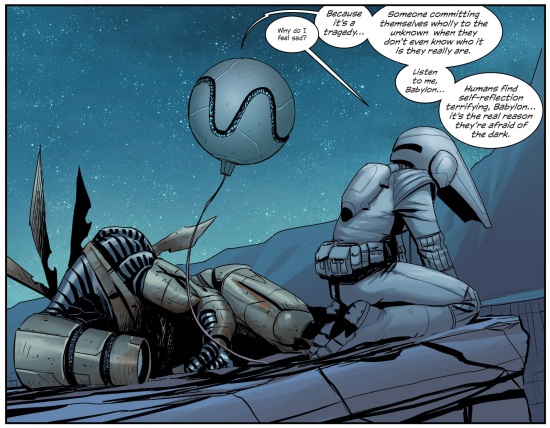 East of West #29 is a story about a father and his son. The father is Death and his romantic endeavours were revealed in season one and during this arc. Hickman only hinted at the notion of a family early on and the actual reveal of the identity of his wife was beautifully handled. Death once commanded the four horseman, who have been the focus of all kinds of turmoil throughout this book. Their retribution is awaiting but the agenda of their leader has always been a personal and passionate one. Where Death was vicious in his approach, his intentions were pure and out of love. His hostility to many were counterbalanced by his intimacy towards his wife, and her revelation of an abducted child led to a journey of a different motivation. It was clear that this child would be special and his reveal was certainly surprising. Babylon had never actually lived but trained in all manners of skills purely from a pseudo artificial intelligence base, known only as balloon. This technological incarceration is so intense that his eyes have never actually seen the real world and are connected to a central computing system. It is disturbing and terrifying that the creatures he meets upon escape are not even visualised in reality. The feral boar that accompanies him appears as a loveable creature to his virtualised vision. His naïve adventures into the real world lead him to quite dangerous predicaments, especially in this issue. It is interesting to see how accurate the hunters appear to his senses as the tension builds from their superficial ferocity. The child’s complete composure almost completely negates it and real vulnerability as what follows are some intuitive combat manoeuvres featuring physical assaults and philosophical rebuttals. There are less panels devoted to the movement of the confrontation but more the prominent moments, hence why Dragotta’s splash pages are incredible throughout. They not only serve at essential plot points but allow time to pause and reflect on the events, thus building anticipation and emotion. 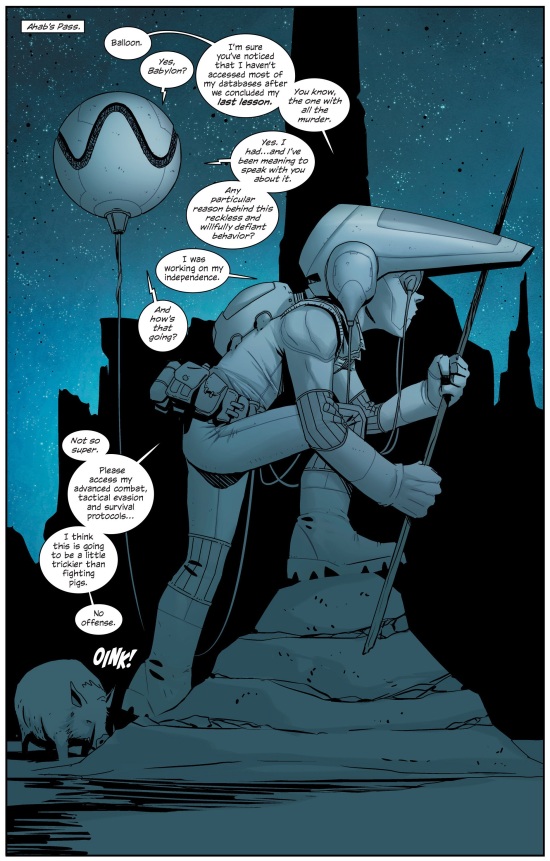 Frank Martin’s colours are kept within the blues and black spectrum of night, and reflect the light emanating from the moon exquisitely. The moments of red and yellow are utilised when implying danger or historical flashbacks. I find it an intelligent touch to have both Babylon and Death appear in the same colour, not only for their complexions but also their clothing. It bears a family resemblance that is otherwise almost non-existent because the child is almost completely covered. But this is the moment, it has all been building to this. The meeting of father and son and its prophetical nature has immense implications to the Message and the future of the planet. Babylon is after all destined to become the Beast of the Apocalypse. Strip away all those notions and there is a man who is overwhelmed by finally meeting his son, who is very much none the wiser. As a child raised by an AI balloon, the concept of a father is based upon factual knowledge. Dragotta manages to engage the solemnity of Death and the obliviousness of Babylon in quite remarkable fashion. Both creators capture the enthusiastic naïveté of a young boy as the night sky starts to wane, with the yellow and orange of the sun ushering a new relationship to the world. 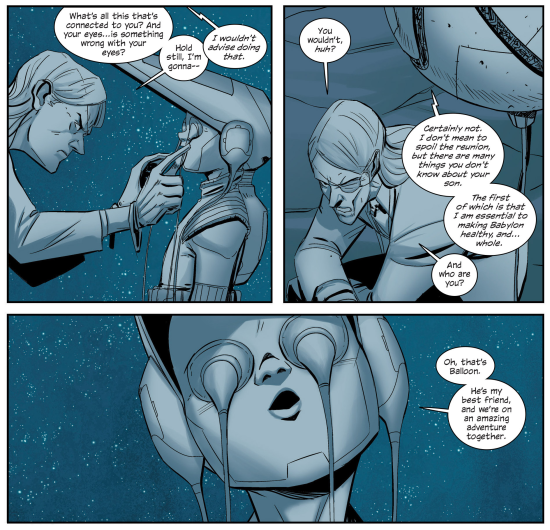 The question is whether this is enough? Has the slowed schedule and devotion to other character built momentum to a point of anticipation and joyousness? Well of course it has, otherwise I wouldn’t be writing this article. I am one for slow emotional character drama over action and plot development, but that is my own personal taste. The incredible time and effort to deliver such a coherent comic delivers enjoyment in spades. For those who are waiting to read the trades, I am sure it will produce a fantastic story that removes the problems of time. And even more importantly it provides the floppy reader an opportunity to cover ground again and perhaps enjoy aspects forgotten over the course of time. When a comic is this impressive it can be read in many ways and still provide satisfaction, and those that dropped off can jump back on again at any time. Ultimately the sheer quality will always win overall and that is probably the most important message, because East of West is the best long running creator owned book that exists today. 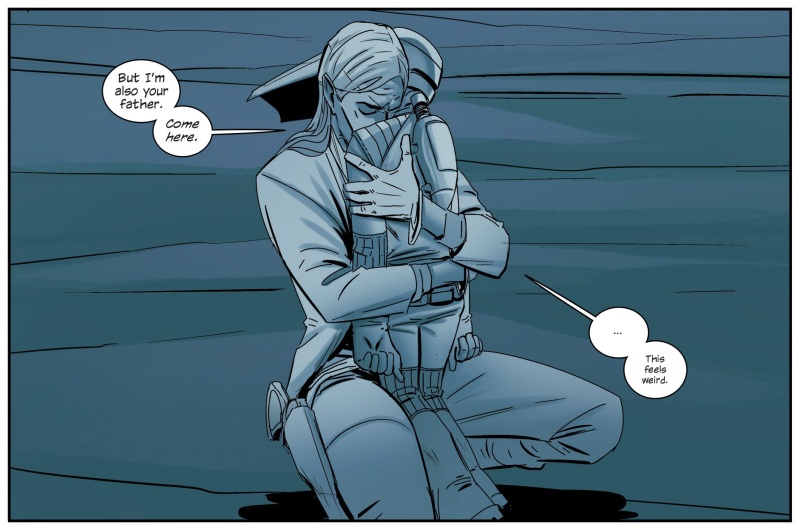