*Warning! The dark side brings spoilers!*

It was always going to be a tall order but few writers could be more up to the task than Kieron Gillen. To take a character of almost no words who practices a minimalist emotional demeanour, and make him into the most compelling Star Wars comic. What is more impressive is how Salvador Larroca has navigated the non-existent movement of Vader’s life armour and show how strong the force is in him. All the while trying to create an interesting story post Star Wars regarding the fall and rise of the Sith lord. The first few issues were particularly slow at times but clearly constructing a grander story and, with the release of the 25th book, it has come to fruition. What seemed to be the use of ever so sleight dialogue and gestures, turns into incredibly significant events and seminal character exposition. The graphic art format does not often easily lend to this type of central personality but Gillen and Larocca have created a language all of their own in describing Darth Vader’s journey of atonement. 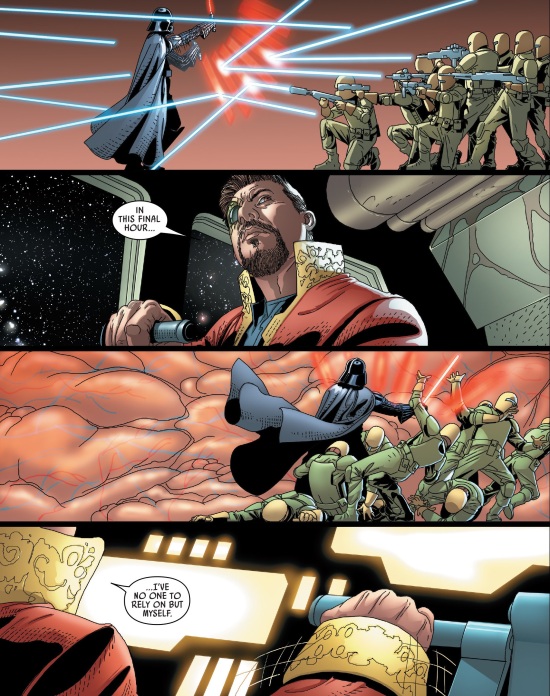 The sheer recognisability of Vader as a character lends to a ready-made knowledge base for Gillen to work with. His calmness and stillness strikes fear and terror without having to explain his prowess with the force, meaning that as long as Larocca produces a recognisable image, the reader will understand the events of the book. However, there is a time pre-Empire where Vader’s failings need to be addressed and that vulnerability is tapped into by Gillen with this story. As strong and as powerful as Vader is, he still answers to the Emperor and must learn how to manage his demotion. And that is what he does. His persona never changes but the disrespect shown to him by the generals bear empathy and almost pity, although Vader is almost completely unaffected by it. Even in this issue, his confidence and self-assuredness bring victory against his successors and a return to the right hand of the father. Other cast members are introduced, including a couple of droids that help push the plot forward but really more so to develop his Vader’s own narrative. This is where the story really takes a Gillen-esque twist because Dr Aphra is the most compelling character whose intellect is so apparent that it naturally begs the question why she would be anywhere near Vader. And that relationship is core to the title and also in affirming the dark side of the man formerly known as Anakin Skywalker.

Issue twenty-five is a culmination of multiple aspects of the story including the rebuilding of an army, the destruction of a traitorous scientist and the reclamation of a throne. There is nothing personal to the revenge on Cylo or to the physical constrictions imposed on General Tagge because there is an air of inevitability around Vader. He was always to return to power upon their failure or submission. He is quite muted in dialogue with Tagge and amusing in his quips towards Cylo, there is no hint that this was ever a challenge. In fact, the way in which he dispatches both is both clever and impressive but looks even better.

Larocca employs the splash page with interspersing letterboxes to show different parts of the scene. They often tell the story of two adjacent characters heading towards differing fates and then produce a huge concluding image, whether this is a dramatic shot of Vader and his saber or a ship flying directly into the sun. Vader’s prowess with the force is demonstrated by the impact around him as you see the bodies of soldiers fall to his side at the hint of a light saber strike. The identical triplicate rectangle panel page is a wonderful way of showing the force powers in action, as the victim flails whilst being choked by an exceptionally still Vader. 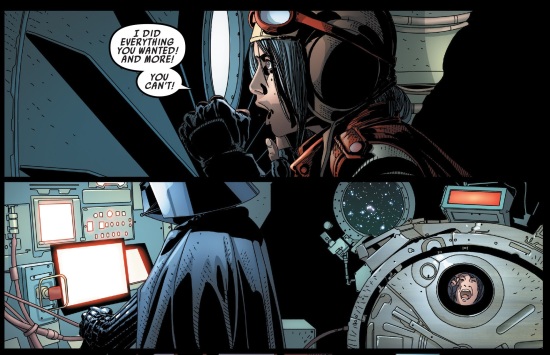 The scenes with the Emperor are in keeping with the personality traits of the dark side, and his support of Vader is a rather poignant twist. But these scenes are not as powerful as those with Dr Aphra. Her knowledge of Vader’s persona is so intimate that she is aware her head rests on a guillotine during all her time with him. She carries out his wishes with aplomb but pushes him subtlety, almost to see how much she can get away with. Her resources are invaluable to Vader but her usefulness comes at a price of her life. To be fair to Aphra she has always known this, and her calculated risks led to further calculated risks culminating with her condemnation to an air lock. Another fate she was not seemingly unexpecting. The tears that she sheds are probably more because she failed to engage with with Vader on a more personal level as opposed to the actual fear of dying. But this scene serves another purpose, her emotional conveyance matches the lack of it from Vader. He may not be able to express his feelings but the way he walks and his lack of conversation implies he is thoroughly unimpressed and unforgiving. Her cries bring empathy and cruelty at the same time. Either way Dr Aphra’s time with Vader has come to an end and we all share that disappointment at a persona we have all exceptionally enjoyed reading. 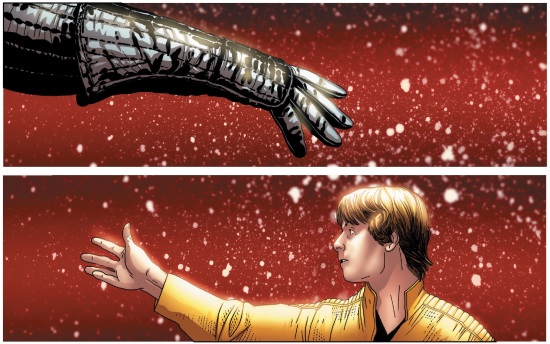 There is a specific part of the rapport between these two characters that is understated but also underlies the whole series, and that is Luke Skywalker. Through all the violence and posturing there is something missing in Vader’s life, something he feels in the force, something he longs for. During the Vader Down crossover there was a scintillated moment where they almost met prior to their well known first encounter. Aphra is aware of this secret and even alludes to it in this issue, which probably contributed to the reason for her final fate. This theme builds to a glorious page seminal to the whole run where Anakin reaches out to Luke. The scene glistens in glorious yellow, matching Luke’s jacket atop a glowing red universe. Everything shines because everything is beautiful as we witness a son reconciling with his father. It is a page so far and away from the central tone of this book that it is clearly fantasy, because when all is said and done there stands a lonely figure on a massive bridge looking out into space. Larocca’s final page is such a meaningful image in showing Vader’s wish for solitude but simultaneously his contemplation of a child he could rule the universe with.